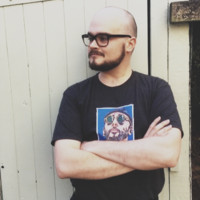 We are thrilled to announce this year’s Slinkies authors. In the next series of posts we bring you interviews with 2020 Slinkies authors, Sophie Overett, Harry Goddard, Ch’aska Cuba de Reed, Liam Higham, Sky Carrall, Emil Colic, Tehya Nicholas and Thomas Alan. In this post, Harry Goddard talks about his short story, Moreton Bay Figs, speculative fiction and about creative writing degrees and his latest reads. Moreton Bay Figs is available from all major ebook retailers.

What draws you to the speculative fiction genre?

When I first started getting into speculative fiction, I thought it was concerned with ‘what ifs’. What if this particular disaster happened? What if humans became universally sterile? What if we could read the future by eating corpses? But if you leave it at its ‘what if’ value, speculative fiction becomes an indulgence, a personal fantasy that lives and breathes insofar as someone thinks ‘ooh that’s neat.’ 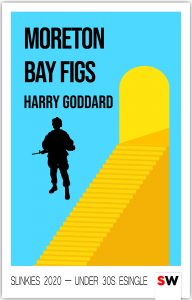 It doesn’t explain why the genre – and its uncountable branches and sub-branches – speaks to the core of people’s imaginations. Speculative fiction isn’t about accurately portraying the results of a hypothetical situation. It is a story happening without constraint.

Take all the elements that make storytelling what it is – which essentially comes down to plot and all the facets that strengthen it. And throw everything else away. No need to ground the story in reality. I’m drawn to Spec-Fic because it shows we don’t need reality to make something realistic. It shows we don’t need actuality to hit someone close to home.

I’ll put it like this: All fiction, and most art, needs to be speculative if it is to reach a deeper truth. It needs to connect on a figurative level. Why mess around then? Why get stuck worrying about realistic, relatable plots? Make your character an android vampire for all I care, as long as you write honestly about what ought to happen in whatever world you create.

A story is a story no matter how it’s happening. The dreamers among us will be writing them in whatever form they take.

Was there ever a version of the story where the background disaster was less ambiguous? What made you choose to make it ambiguous?

The story’s disaster was always incidental. I wrote the first draft of this story well before any of the wider disasters we are facing were anything more than a mounting existential dread.

One of my distastes about disaster fiction is the idea of gaining surplus enjoyment from picturing yourself in a less comfortable position. What if we, suddenly, became the refugees? Ooh, salacious! Would it really take flesh-eating-nano-machines to get us to think beyond ourselves? I don’t think this is empathy, I think it’s curiosity.

My main concern is not picturing how much we have to lose; I just wonder if we would abandon everyone else to keep what we have. I wanted to look at Sydney and ask if our brutally neo-liberal culture might not be eroding our humanity. How does the imperative to compete and to protect one’s own translate to humanity’s survival? The disaster in the background could be a volcano, or anything.

What are the best lessons you learned from your creative writing degree?

There is a genuine pleasure in reading other people’s work. Coming in each week with stories to workshop, across several subjects, you feel a part of something bigger. You see the huge field of creativity before you and the sheer range of ideas and interests and passions from tutors and students, and it inspires you beyond belief. You feel connected – many of us for the first time – to the strange, universal profession of writing.

If you’d like to experience the best aspect of a writing degree, reach out and join a writing group. It’s the absolute best thing you can do.

This ties into the next lesson that I encountered, in that other people are far more important than you. The reader is the most important, followed by literally everyone else ever; the people in your class, the people helping you, buying you dinner, letting you stay at their place, the people who are making the art that inspires you. You are miniscule in comparison. I’m dead serious, I’m not trying to be cute here. Meaning is created in a story from how it is interpreted and reinterpreted. It enters into a wider field of experience and you have no control over how people encounter it – they’ll bring their own knowledge into what they’re reading.

The most you can ever do is be a small part of how people might create meaning for themselves. And this small part has taken everything you have learned up to this point and has only fleetingly existed in hindsight and is now gone forever.

It’s never your story. As a writer, you don’t exist. So don’t flatter yourself. Kind of ironic in that no one will care about your work as much as you do, but you are arguably the least important part of its creati What are your favourite authors and books? How have they influenced your writing?

I owe everything to Emily Rodda’s Deltora Quest, Philip Reeve’s Mortal Engines Quartet, and Philip Pullman’s His Dark Materials Trilogy. These books and authors sent me down a path from which there is no return. Their worlds pulled me in. Their characters fascinated me, and their words were just pure enchantment. They cursed me with their writing.

I think the best speculative fiction writer working today is China Miéville, and I want to steal everything he has. His world building is second-to-none, and his imagination consistently enrages me with how brilliant it is.

Also, everyone writing in spec-fic should pay their respects to Ursula K. Le Guin. Her books, especially The Dispossessed and The Left Hand of Darkness, challenge basic conceptions about humanity, and are grounded with a deep sense of empathy. She is what speculative fiction is all about.

In a practical sense, I enjoy how challenging it is, and the opportunity the form gives to honing the basics. A short story can be pushed so far from first draft.

In a wider sense, I think the short story form is close to poetry in that it works carefully with space, and tries to achieve something well beyond its scope. A well-made short story has the work-quality of a beautiful object. Short and sharp, no rough edges or wasted space.

It is an act of craft, intensity, a working of truth, and a fine and noble pursuit if I don’t say so myself.

At the moment I’m working on a longer-length piece set on a dystopic frost world, as well as some Goosebumps style short stories… always and always more and more short stories. It never ends.

Other than that I am a recluse.

Harry Goddard is a Sydney-based short story writer. His work has been included in Going Down Swinging, Mascara Literary Review, and the UTS Writers’ Anthology. He has studied Creative Writing at UTS, and currently teaches primary and high school English to students across Sydney.

If you’d like, check out another story by me over at Going Down Swinging.