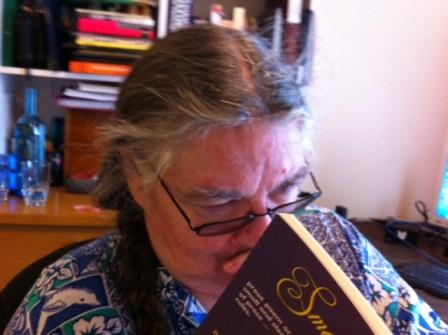 As the only publisher of an annual Australian book of prose poems and microfiction, SPINELESS WONDERS is very excited to announce an award named in honour of renowned experimental poet, joanne burns.

joanne burns writes poetry [including prose poems], monologues, and short futurist fictions or farables. She has been writing prose poems since the late 1970s. Since 1972 many collections of her work have been published, the most recent being ‘an illustrated history of dairies’ 2007, and ‘amphora’ 2011, both published by Giramondo Books. ‘kept busy’, a cd of joanne burns reading a selection of her work, was released in 2007 by River Road Publishing. Prose poems from ‘on a clear day’ UQP 1992, an ETT Imprint book since 1997, are included on the current NSW HSC English syllabus. She is working on assembling a Selected poems collection, and on a new poetry collection ‘brush’.

…..[the] poem is a show off, and desperate to be noticed; but the prose poem…..is more humble, or perhaps more patient, more subtle……the prose poem says find me.

Today she might add ‘the prose poem is perhaps more sly’.

**Some other aspects of the prose poem that interest her…

i) The flexibility of the prose poem form – how it blends or bends the genres of poetry and prose.

ii) The ‘political’ nature of the prose poem – its subversiveness – how it challenges and undermines the iconic territory and shape of the [line break] poem on the page.

** She likes to call paragraphs in the prose poem ‘stanzagraphs’.

joanne burns has long been a virtuoso purveyor of the prose poem (and poem-prose) that concisely picks out the entrails of a scene, in wildly imaginative narratives that juggle the comic with the more considered. Waylaid by her flickering surrealist imagery that strobes across suburban life, religious iconography, and satires on prescriptions of the feminine, one can also discern a persistently gripping poignancy embarking on analytic pilgrimage through time and memory. Burns wraps entire novels into the Tardis of the prose poem, a ringing telephone-box – with optional peel-off jokes attached.

Joanne – a great social satirist – and how we need one! – writer extraordinaire on the border of prose and poem – generous with advice and encouragement – felicidades!

Congratulations to Spineless Wonders on this much needed initiative for an all too often overlooked form of writing. And congratulations to Joanne Burns, whose wonderful work has the recognition it deserves in having this award named for her.

It is up-lifting to see that long-time Sydney poet, joanne burns, is to have an award named after her. She has been a champion of the prose poem, one of the great but often misunderstood and under-rated literary genres. The beginning of the twenty-first century, driven as it is by digital technology, is the time of the short form that includes micro fiction as well as the prose poem. Spineless Wonders is without doubt one the most stunning things to happen in Australian, and indeed international, publishing this century. They are twenty-first century ready, for they have recognised the time of the short form in a digital publishing environment that also enfolds the printed book .

I can’t think of a better name for an annual award for prose poems and microfiction than ‘the joanne burns award’.  For years now joanne’s writing has been at the sparkling point of the pin of short but deadly literary gems. Her tiny darts are on target every time, and punch well above their apparent weight. Their brief texts carry a huge load of generous humour and humanity.

About The joanne burns Award

The precise form that The joanne burns Award will take each year may change. For the past two years, for instance, the Spineless Wonders prose poem/microfiction competition has called for submissions with a maximum of 800 word limit. In future years, The joanne burns Award may be for other brief forms, such as nanofiction or for blended, genre-bending prose poem or poetic prose forms yet to be developed.

The theme of each year’s joanne burns Award will also vary. Some years the theme may be open whilst in others, such as in the 2012 Australian icons competition, the theme will be specified.

As in previous years, the competition will be blind judged according to the criteria set out in the Terms and Conditions. The joanne burns Award judge for each year, along with the competition parameters, will be announced in the first half of each year.

The joanne burns Award will carry a monetary reward as well as an offer of publication for those pieces judged to be the highest quality entries in our annual competitive cull.

About the Spinelesss Wonders annual anthology of prose poems and microfiction

The joanne burns Award for 2013 is now open, see our submissions page, here,  for details.