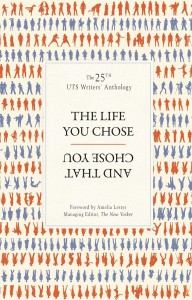 The UTS Writers’ Anthology showcases the considerable talent emerging every year from one of Australia’s most respected writing programs. The Life You Chose and That Chose You is the twenty-fifth in a series that began with Pink Cakes in 1982. For some students, the Anthology marks the beginning of their writing careers, creating an opportunity for that elusive first publication.

This year’s contributions were selected by a student editorial committee from over 300 submissions to produce a publication of the highest quality. In her foreword, Amelia Lester, Managing Editor of The New Yorker, describes how, in modern life as we produce and consume more words than ever, ‘the creation and promotion of writing that endures in our imagination is more vital than ever before.’

Angus Benson’s story, ‘Down South’ is both a tale of self discovery by the central character and an exploration of social and racial issues in contemporary Australia. The story is set during Oscar’s final summer holidays and tackles the small humiliations and alienation associated with growing up. The writer reveals tensions between the sexes, exposing the abusive tendencies of the young men in a scene between Mul and ‘some blonde’ and in the group’s attitude to a young Indigenous girl who might be ‘put on lay-by’. 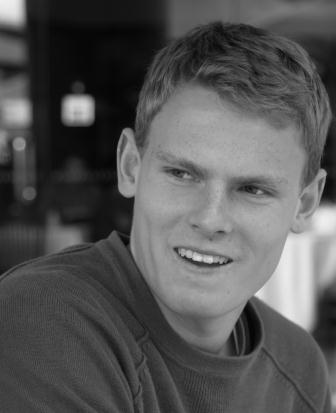 Benson exposes the uneasy gender and class relations in a country we like to think of as ‘equal’ and ‘classless’. His deft touch is evident in the scene at the Aboriginal mission when Oscar, terrified after being left behind by his mates, is simultaneously attracted to the local girls, even as he pities them and is humiliated by their laughter. Oscar recognises his own hypocrisy ‘for thinking I was superior.’

The urgency of the young men to prove themselves in the surf break signals an important ritual in their progress towards manhood, as does Oscar’s realisation that he has grown apart from his mates, recognising that, ‘I felt lonely even with them around.’

What inspires you to write?

Writing gives me a chance to remember things from when I was a kid. I like to bring them back. Then I can reshape those memories any way I like on the page. I’m still surprised every time I realise I’ve created a rhythm and a mood in a few words.

Sitting down during a quiet moment, with a pencil and paper, is about as close as I get to a sense of peace.

I had an email from my uncle after he read the story. I rarely talk to him. But now we’ve got a bond that we’d never have otherwise. If this isn’t inspiration, then it’s inspiration for my next story, because I know there’s someone who’ll be willing to read it.

In ‘Down South’ you tackle Indigenous issues, do you see Indigenous culture as a significant influence on your writing?

Yes. I tried to present the picture as I see it. If I use the Indigenous plight (which it is) as a yardstick, the challenges in my life pale in comparison. Also, I feel like I owe a debt. But the urge to repay the debt isn’t because I want to relieve my chest of the guilt from the pile of invoices owing.

Are there any influences that have been important in developing your writing?

Debra Adelaide has taught me more about the nitty-gritty of writing than anyone else. She’s a demon when it comes to finding the weak points in a story, but a saint when it comes to helping fix them. Until I met her, I had my head in the clouds. The same goes for Delia Falconer, but I only had the pleasure of listening to her lectures.

What other creative writing programs have you been involved in?

Martin Harrison taught me so much about ‘new writing’ in a subject called Writing Laboratory. There I realised just how much space there is for writing.

I wrote a narrative of logos for this subject. Then I had the opportunity to exhibit this work with some other students/friends. We made a night of it with drinks and food and nervous public readings.

Can you tell us more about this?

The subject or the exhibition? Well, both are a bit of a blur now. Some of what Martin had to say made sense to me for a few weeks, because I was in overdrive trying to come to grips with it, reading Helen Cixous, Derrida, Heidegger, Benjamin… I honestly couldn’t give a decent response. The subject was enlightening, but I’m not enlightened enough to explain it in my own words.

What are you writing at the moment?

I’m trying to write a chapter two to ‘Down South.’

Who are your favourite authors and why?

Debra Adelaide – because her writing has poise, and her words are poised – on the edge of something, always elusive. Like her writing, the more I get to know her I feel I know her less and less.

Tim Winton – because he’s an Australian literary star. I get the delights of reading an awesome writer, with the comfort of his characters, his accents, the small towns and big landscapes.

Charles Dickens – I don’t know how, but there’ve been times where I’ve thought this guy was my best friend. He’s still a friend, but I haven’t caught up with him for tea in a while.

Where do you see your writing taking you? What is your ambition?

Hopefully to a writer’s festival where I can meet Tim Winton, but realistically no further than my desk. My ambition is to find the confidence and stamina to take my writing a step further.

Angus Benson grew up surfing, and through a Writing and Cultural Studies degree, has found inspiration from the stories of Indigenous Australians. He likes to explore cross-cultural interactions through writing.

Vanessa McKinley was planning an academic career after gaining first class honours in English Literature at UNSW and beginning a PhD on Branwell Bronte. She began working part time as a technical writer and editor. Her career moved into management consulting where she developed her business writing skills. For the past few years she has concentrated full time on creative writing, working on short stories and children’s books.