Guest blogger, Rebecca Parker reports on the recent launch of Carmel Bird’s latest collection, My Hearts Are Your Hearts and the Michael McGirr Selects series of digital long stories.

On Saturday the 25th of July I traipsed up the stairs of Berkelouw books to attend my first book launch. Walking into a room full of strangers unprepared and alone isn’t something that I would usually do, but in the past year I’ve lost myself to the familiarity and grittiness of Australian literature. As a result of this, after hearing that prolific Australian writers, Gabrielle Lord and Carmel Bird would attend the event I raced to RSVP.

Once I reached the top of the stairs I took a deep breath and weaved my way through shelves of second hand books towards the most animated group. I needn’t have felt nervous; the girls that I introduced myself to were incredibly friendly. They presented themselves as Adara Enthaler and Sophia Casanova, two of the interns from the host of the event, Spineless Wonders.

Whilst we waited for the launch to begin, the three of us helped ourselves to a generously packed cheese plate and the girls chatted about the digital and printed novels that were being released. They told me that the evening was to begin with a presentation of the Carmel Bird Award, an Australia wide competition that has been sponsored by Spineless Wonders since 2011. After hearing small, yet tantalizing snippets about this year’s compilation, I couldn’t wait for the evening to properly begin.

Once being invited to take our seats, the launch was introduced by Walter Mason, self-confessed, ‘writer, scholar, dreamer’ and author of books such as, Destination Saigon and Destination Cambodia. We all listened attentively as Walter outlined the history of the Carmel Bird Award. He informed us that writers selected for the award have their short stories published in print anthologies that are produced biennially. These include Escape (2011), The Great Unknown (2013), and a forthcoming, Crime Scenes. Every second year, the award is specifically for longer stories, the first of these was the Amanda Lohrey Selects series. This anthology was published into a digital single format in 2013 and primarily showcased the works of female writers. 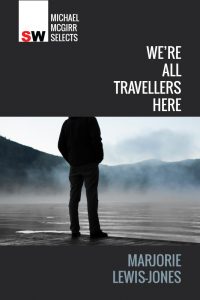 The 2014 award was open to all, had no dominant theme and was judged by Michael McGirr. Michael’s chosen winner was Marjorie Lewis-Jones, a Sydney writer and editor, who received the Carmel Bird award for her story, We’re All Travellers Here. Marjorie’s tale was glowingly described by Michael McGirr as; ‘a terrific achievement, which makes great use of cultural history to frame its portrait.’ Whilst Marjorie was unfortunately absent, we were all introduced to a wonderful acceptance video compiled by Spineless Wonders interns, Samuel Elliott and Mikayla Kolnar.

Finally, it was time to listen to the literary prowess of four of the authors that were selected for the Micheal McGirr Selects series.

The readings began with Andy Kissane (middle right), a Sydney writer and teacher, who enticed us with his tale, ‘love bites’. His story follows the experiences of Emily, a research scientist, conducting malaria vaccine trials in West Africa.

The second writer to grace the stage was Blue Mountains novelist Jane Skelton (far left), reading from her story ‘Flying Fox’. The tale, described by Michael McGirr as a ‘witty and bittersweet story’, explores the relationship between a gay man and his mentally ill brother.

A little outboard slides by; I wish all I knew was the river and its life. Out in the middle is a little island you can reach only by boat. A second identical island lies further out, behind it. These islands are like me and my brother – we exist, separate, yet somehow we’re the same. The water is beginning to calm me. Maybe I should commit myself and stay forever.

I do not reach the island of calm. A bald man in pyjamas and thongs leaps the sea wall beside me, pauses to scoop up the dead puppy, and goes flapping over the sludge and into the water.’

The final line of the segment Jane read is characteristic of the dark, yet laugh-out-loud humor, that haunts her tale.

Newcastle writer and past winner of the Page Seventeen short story contest, Erol Elgin (middle left), had us all laughing into our plastic cups of wine. His story ‘A Tintoretto for the Soul’ follows an ill chanced author that is mistaken for a famous poet. Erol’s protagonist is faced with a host of difficult decisions when he is asked to write a poem so moving that it will win a woman her ex-husband back.

Finally we were introduced to the writings of Claire Aman. Claire’s fiction has appeared in a variety of outlets such as Cracking The Spine: Ten Short Australian Stories and how they were written (Spineless Wonders, 2014) , Best Australian Stories and many more. I was particularly looking forward to hearing Claire’s reading of her tale Why the Owl Gazes at the Moon as Adora had conspiratorially told me it was her personal favorite. The melancholy beauty of the tale was capitulated through Claire’s protagonist Yvette, whose life in a stagnant outback town is punctuated with her inability to come to terms with her sister’s death.

Once the rapturous applause for the writers had died down, the trajectory of the night changed to accommodate the launch of Carmel Bird’s My Hearts Are Your Hearts.

Gabrielle Lord (right), also known as Australia’s queen of crime fiction, was in my humble opinion, the best individual to introduce Carmel (left). Her warming words on Carmel’s short stories not only communicated their friendship, but spoke of her intense admiration for Carmel’s work. The most intriguing quality of Gabrielle’s description of My Hearts Are Your Hearts was Carmel’s ability to write tales that spoke of ‘great beauty and tenderness [alongside] stories that ache with loss’. Through reading out her favorite parts of My Hearts Are Your Hearts, Gabrielle reminds us that ‘to read these stories is to know one is in the presence of a master writer’.

The evening ended with Carmel, who took the stage and spoke to us of her life as a writer. She was wonderfully funny and her charismatic attitude left me smiling long after the night was over. This was especially due to the cotton bag that she passed through the crowd and after reaching inside I was left with a shiny chocolate heart. 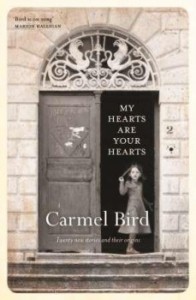