In this episode, we celebrate Queer life with two stories from our Little Fictions’ show, ‘I HEART LGBTQI’ which was performed at the Knox Street Bar in Chippendale back in February, 2017. The event was held during the Sydney Gay and Lesbian Mardi Gras, a  hugely popular festival, the Sydney Gay and Lesbian Mardi Gras aims to raise the visibility of the lesbian, gay, bisexual, transgender, queer and intersex communities. The two stories we are presenting in this episode do just that. 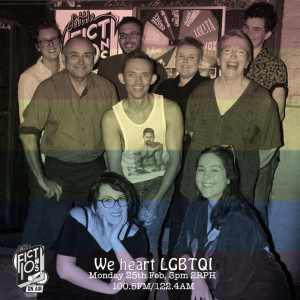 In our first story, ‘Asexual Gelatinous Blobs’ by Sydney author, Harry Kolotas, the writer attempts to walk in the shoes of his gay son. It is narrated by actor, Mark Dessaix.

In ‘Danny Boy’, Melbourne author, Marian Matta tells the story of someone who feels they were born into the wrong body. It is narrated by actor, Kurt Pimblett.

A warning, some of this episode contains strong language.