‘All examples of clarity, and of careful, engaging construction’ CARMEL BIRD

Small Forest is a collection of nine short stories. The stories are linked by recurring concerns, such as the return of the repressed. The effects of music and the nature of relationships between generations are other concerns. In ‘Vivien’s Fingers’ a new parent tries to learn the piano, in an attempt to maintain an inner life separate from her young child. ‘Children’s Hospital’ depicts a ward of children suffering anorexia, while ‘Uncle Dan’s War’ explores the effects of post-traumatic stress on a returned POW. The protagonists are varied in these stories – and variously haunted. 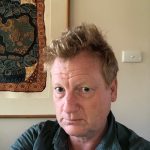 William Lane lives in the Hunter Valley, NSW. Transit Lounge has published three of his novels, Over the Water (2014), The Horses (2015) and The Salamanders (2016), and is due to publish his fourth novel, The Word, in September 2018. He has also published several short stories.

Also available as ebook from Booktopia, Amazon and Kobo