Ten literary gems to spark up your bookshelf. 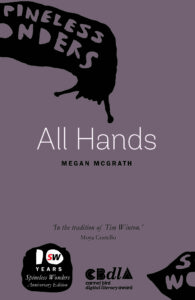 All Hands lives on the Australian coastline, running through the hopes and fears of people who call the ocean home. The stories nestle into relationships between characters and their return to family, childhood, romance, and who they are. The Australian coast is not simply a sunshine haven, but a vastly rugged home for personal reflection and growth.

‘All Hands sits in the tradition of Tim Winton’s Western Australian stories of masculinity and the ocean, except here it is Queensland, and written by a woman.’ Moya Costello, 2019 Carmel Bird Digital Literary Award judge

MEGAN MCGRATH is from North Stradbroke Island in Queensland, Australia. She has written for the New York Times, Meanjin and Griffith Review. Her award-winning short fiction is published in literary journals and anthologies. Her recent work includes surf fiction for Tracks magazine, and the novella Whale Station. 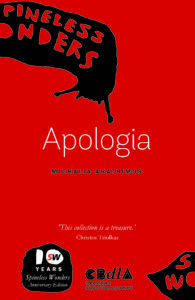 Apologia is a collection of stories threaded by the themes of loss and displacement. Each piece captures a tumultuous moment in time, and is grounded in the psychological journey of how people deal with their own traumas and fears. Though this collection is host to an array of completely different and individually captivating stories, Arathimos has succeeded in binding them through the depth of human connection and portrayal of raw human pain, both mental and physical. A truly inspiring collection of work, each piece will leave you with a better understanding of the hidden sufferings humans endure in their daily lives. Winner, 2020 Carmel Bird Digital Literary Award

MICHALIA ARATHIMOS is a Greek writer. She has published work in The Lifted Brow, Westerly, Overland, Landfall and elsewhere, and is Overland’s fiction reviewer. Her novel, Aukati, was published by M?karo Press. She is the Writer in Residence at Randell Cottage and will hold the Grimshaw Sargeson Fellowship in 2021. 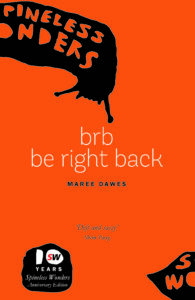 Can online sex life becomes more technicoloured than the real thing? Told in first person, this verse novel uses the language and shape of online chat, email, fragments and stream of consciousness to take the reader headfirst into the world of online life in the nineties. brb: be right back relives the beginnings of social networking with the humour, excitement and dilemmas it can pose.

Reviews: ‘Dawes deftly parses the sad sass, seductive disassociaton and weightless absurdity of cybersex and an online affair with biting fidelity.’ Alvin Pang | ‘Maree Dawes is a new and refreshing voice in Australian poetry. brb: be right back –an exciting addition to the verse novel genre – is a blend of lyric, narrative poetry, and cyber-discourse.’ Barbara Temperton

MAREE DAWES is an West Australian poet, published nationally and internationally. Maree’s first collection Women of the Minotaur explored the lives of mistresses in Picasso’s life. It was featured on Poetica in May 2009 and dramatized for the PIAF writers festival 2010. Her short story ‘I am so sweet and truthful’ was adapted into a short film. 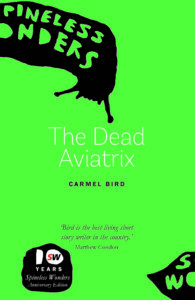 In prose that sparkles with wit, shocks with insight, and beguiles with the air of legend, these seven stories take the reader from post-apocalyptic Tasmania to the tragedy of surrogate pregnancy in the 1950s. Loss of species, the whims of publishers, the question of Islam in regional Australia – these are among the subjects Carmel Bird addresses in her characteristic probing style.

‘As you’d expect, Bird’s beautiful stories soar, though never into a realm you could anticipate.’ Debra Adelaide

‘Bird is the best living short story writer in the country.’ Matthew Condon

CARMEL BIRD is the 2016 winner of the Patrick White Literary Award. Carmel’s work spans forty years, and she has published thirty-eight books. Her most recent collection, published in 2015, is My Hearts Are Your Hearts, and the most recent of her eleven novels is Field of Poppies, published in 2019.

Brooke Dunnell’s collection of stories links females and dogs in surprising yet hauntingly familiar ways. Cleverly crafted, it explores a range of voices, ages and socioeconomic conditions, prodding you to see society through fresh eyes. From a missing person’s case, and a boy grappling with puberty, through to a girl watching helplessly as her brother trains his dog to kill, this book will pull you in from beginning to end. Runner up in the 2020 Carmel Bird Digital Literary Award.

‘Across five short stories and a novella, Brooke Dunnell’s Female(s and) Dogs lights a firecracker beneath the sleepy veneer of suburbia. Linked by the recurring motif of vulnerable dogs and the equally imperilled people who look after them, these are stories with bite. Beautifully observed, charged with tension: each story here is a page-turner.’  WAYNE MARSHALL, Shirl

BROOKE DUNNELL is a Perth writer whose short fiction has been published in Best Australian Stories, Meanjin, Westerly and other journals and anthologies. Her work has been recognised in a range of competitions including the Neilma Sidney Short Story Prize 2017, Bridport Short Story Prize 2019 and winner of the 2021 Fogarty Literary Award. 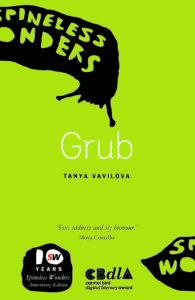 Grub brings its focus to those things we don’t see, to the people on the edges of society who might be a little “grubby”. Its setting is Sydney’s inner west, in a not-too-distant future, where the looming concerns of today (like climate change and capitalism) have come to pass, and subsistence is commonplace.

TANYA VAVILOVA is a queer writer preoccupied with liminal spaces and outsider perspectives—by life on the margins. She has published work in Meanjin, Mascara Literary Review, Westerly, Seizure, The Lifted Brow, and UTS Writers’ Anthology. Her writing has won the Copyright Agency’s Cultural Fund Best Prose and Wollongong Writers Festival Short Story Prize, and has been commended or shortlisted for the Newcastle Short Story Award, Overland’s Fair Australia and Neilma Sidney prizes, and the Seizure Viva La Novella, among others. Her debut collection of essays, We are Speaking in Code, was released in 2020. Grub is her debut collection of short stories and won the Carmel Bird Digital Literary Award in 2019. 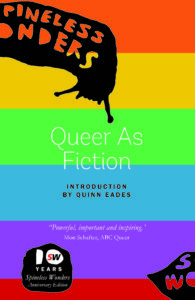 This is a collection of contemporary stories from the Queer community. It is about love, sex and identity told through diverse stories from buying a double bed, meeting neighbourhood witches and early morning swims. They talk about freedom and misery, victories and injustices. The result is a slew of fascinating tales expressing what being LGBTQIA+ means today.

Introduction by researcher, writer and poet Quinn Eades whose work lies at the nexus of feminist and queer theories of the body, autobiography, and philosophy. Eades is published nationally and internationally, and is the author of all the beginnings: a queer autobiography of the body, and Rallying.

About The Editors BRONWYN MEHAN is the founding publisher of Spineless Wonders. Her short fiction has been published in Meanjin, The Age newspaper and Southerly. In 2011 she won the NT Literary Award for Poetry. YGRAINE MCLAUGHLIN is an emerging editor and writer of YA fantasy. 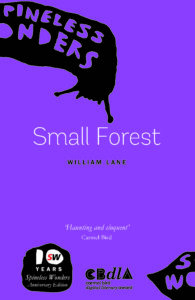 The stories in Small Forest explore repression, the effects of music and the nature of relationships between generations. The protagonists are varied in these stories – and variously haunted.

‘The small forest of this collection’s title provides an eloquent metaphor that invites the reader to move through the stories in search of revelation and understanding, as well as pleasure in the reading.’
CARMEL BIRD, 2016 Patrick White Literary Award recipient

WILLIAM LANE lives in a quiet, rural corner of the Hunter Valley, NSW. He shares his life with his librarian partner and his three teenage children. After completing an Honours degree in Australian literature, he completed a doctorate on the Australian writer Christina Stead, and has had several critical articles on Stead published in literary journals. He is the author of four other novels published by Transit Lounge: Over the Water (2014), The Horses (2015), The Salamanders (2016) and The Word (2018). His short story collection, Small Forest, was a finalist in the inaugural Carmel Bird Digital Literary Award, and was published online in 2018. 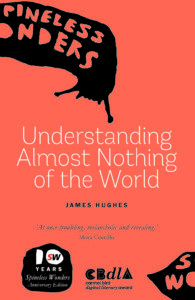 Set against a backdrop of suburban Australia and rural South Korea, a boy becomes a man and continues to question what he knows about the world. Understanding Almost Nothing of the World is a collage of fragmented memories about the ephemerality of childhood relationships and an evocative journey of self-realisation through the lens of adult naïvety.

‘Understanding Almost Nothing of the World anatomises an Australian-ness in a global culture, and thence codifies the troubling and melancholic nature of the senseless.’ Moya Costello, 2019 Carmel Bird Digital Literary Award judge

JAMES HUGHES lives in Melbourne. His stories have won The Angelo Natoli, Hal Porter and Tabor Adelaide prizes. His story,‘The Stone, The Storm, The End of Huckleberry Finn’ was shortlisted in the international Bristol Short Story Prize. 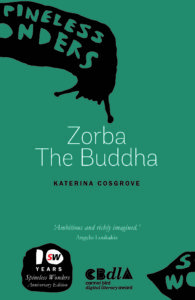 The year is 1986, Guru Bhagwan Shree Rajneesh has been exiled from the United States after the highly scandalous failure of his Oregon ashram, Rajneeshpuram. Told from four different perspectives and through various time jumps, Zorba the Buddha documents how this movement fell apart from the inside out. Each character’s experience sheds light on the attractive qualities of the movement’s Master, as well as their individual struggles to follow his commands and align their faith with his teachings. A truly compelling read, Katerina Cosgrove’s novella and reflective essay give insight into the true events that began in Oregon and ended in Crete. Runner up in the 2020 Carmel Bird Digital Literary Award.

KATERINA COSGROVE is the author of The Glass Heart, Bone Ash Sky and Intimate Distance, which won the Griffith Review Novella Prize. She has written for local and overseas publications such as Al-Jazeera, SBS Voices, Island, Daily Life, The Big Issue and has co-judged the Nib Award for Literature from 2014.