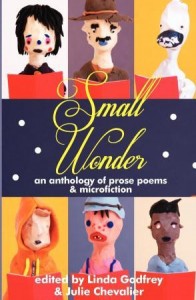 We are reproducing, in full, this terrific review by Ali Jane Smith of our first prose poetry/microfiction anthology, Small Wonder. You can find other reviews, great fiction and poetry in the final issue of Famous Reporter here. Copies of Small Wonder can be purchased from our Products Page or ask for it at your local bookstore. And you can interviews with contributors  here and you can listen to audio recordings of Small Wonder prose poetry and microfiction here. And don’t forget that our next prose poetry/microfiction competition closes November 30. Details here.

I suspect that ‘Small Packages’ might also have been on the whiteboard when the title for Small Wonder was brainstormed, and it would have been apt, because there are many, many good things between the vibrant covers of this collection. Printed on the front free endpaper of the book is a quote from writer and editor Jonathan Carr that describes the difference between prose poetry and flash fiction. Carr’s observation that flash (or micro) fiction is about compression, whereas the prose poem “is often the very opposite … an exploding up of a form” nicely sets the paradigm. The publisher held a competition to uncover work for the anthology, as well as inviting a number of writers to contribute. A shortlist and winners were selected by poet Joanne Burns, herself an invited contributor, and the result is something that editors Linda Godfrey and Julie Chevalier describe as fusion. The sounds and flavours of the writing in the book show that the fusion metaphor has served readers well: although the prose poem form has been known to lure poets into something that reads like a parody of Italo Calvino, and there are one or two such pieces in this collection, overall the anthology is remarkable for its stylistic diversity. Contributors were encouraged “to bend genres and break rules”, and so it is to be expected the reader may love some of these pieces and loathe others. The book is something like a very good party: a few old friends to catch up with, interesting new people to meet, and all the ingredients for a strange and memorable night. A little like a Spineless Wonders book launch, perhaps.

Small Wonder opens with Dael Allison’s ‘dreaming poets dreaming’, from her series on the painter Ian Fairweather’s journey from Darwin to Timor on a flimsy, self-built raft. There is something about the visual appearance of the prose poem, about the dependability of sentences organised in square and sturdy paragraphs, that provides a handrail when the content itself becomes uncanny. Allison has taken advantage of this visual solidity to create an impossible confluence of Pablo Neruda and Michael Ondaatje as Fairweather’s shipmates. Allison’s second contribution, ‘nightburst’, is a richly visual imagining of Darwin Harbour as it might have been fifty years ago in Fairweather’s time. Both poems may lead the reader to seek out Allison’s recently released collection on this subject, Fairweather’s Raft (Walleah Press 2012). 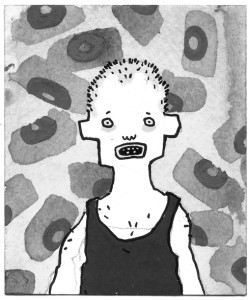 Judith Beveridge’s ‘The book of birds’ is about queuing, about ego-conciousness, about the strange places that a search for meaning can take us. Beveridge takes advantage of the fun to be had with zoological nomenclature. She shares the pleasure she finds in language with the reader, offering wonder, humour, suspense, and narrative twists in the space of a page and a half.

In the prose poems contributed by Joanne Burns, the prosaic and the metaphysical, big things and little things, sit companionably side by side: a cheese roll and zeus, hair and Akashic records, dandruff flakes and exorcism. Joanne Burns is an extraordinary and accurate observer, and the proximity of the profound and the absurd or mundane in her work is more than funny and arresting, it is a manifestation of human experience, where small pleasures and irritations stand alongside the great things of our lives.

Anna Couani has been a significant presence in Australian poetry for decades. Her disrupted and disrupting text, ‘The old manuscript’, offers more with each reading. The poem includes repeated motifs of storytelling and creation, of watching and being watched. Although the syntax is not ‘experimental’ the piece is troubling, an aporia that has the reader tracing back and forth amongst the sentences and paragraphs to piece together a narrative or pattern. 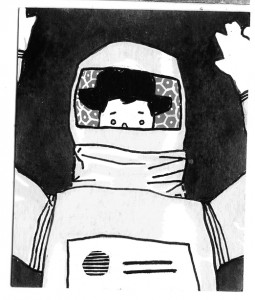 Michael Farrell’s poem The story of what’s inside the heart makes a strange kind of sense. A line at the visual heart of this poem reads “Everyone wants to know what it means”, a question that this poet has likely been asked from time to time. The repeated use of the words “in” and “inside” do create what might be an illusion of depth of field, of inside and outside, perhaps analogous to meaning and language. As Farrell writes, “there’s so much style in style, it’s the only thing to eat, spoon by spoon”, but the question remains as to whether this poem considers the possibility that perhaps language can refer to that which is outside itself, or whether the use of images of hearts, blood and Jesus, are a play on the desire for something that lies beyond language. Best just to read the poem and see what it does to you – if you are lucky it will feel like having your brain pleasantly but relentlessly tickled.

At the micro fiction end of the Small Wonder short form spectrum, Shady Cosgrove’s ‘Visiting’, in which the narrator’s late mother is glimpsed at the wheel of a 1970s Cortina 1600, is a story with real emotional heft that unfolds in three short paragraphs of telling detail. Every word is in the right place, and not one wasted.

There are many more works in Small Wonder that deserve particular attention: Michael Sharkey’s ‘A musical offering’ employs the poet’s characteristic piquant wit, and his prose poem ‘The strong, the silent type’ is a fable that takes the breath away; Adam Ford’s contribution ‘Sequel’ begins where the graphic novel Cowboys and Aliens ends, and is a far more successful spin-off of the franchise than the movie; the always inventive and often very funny Carol Jenkins has contributed ‘An illustrated history of the bicycle’; Michelle Cahill has written a startling description of mothering; and Vivienne Plumb’s deft and amusing ‘The cinematic experience’ is a handy pocket review of whatever film you are thinking of going to see.

The winner of the competition as selected by Joanne Burns was Charles d’Anastasi’s ‘Madame Bovary’. A poetry reading becomes the carriage scene in Flaubert’s novel, an idea that makes perfect sense if you attend a great many poetry readings, and when you read this piece. Commended is the excellent ‘William Shatner vows to save the Great Basin Pocket Mouse’ by Erin Gough which lives up to its title, and Clare McHugh’s ‘Briefly’, a witty meditation on the brief for the competition.< /p>

Readers of Famous Reporter likely already know the value of the independent presses in Australia. We know that publishers like Walleah Press and Spineless Wonders guarantee the depth and diversity of our literature. More important, we know that we will have a good time with the writers and editors that they find and nurture. Spineless Wonders has presented this anthology with a bold, bright cover design and original illustrations from artist Paden Hunter that are themselves worth the price of admission.

The brief and selection process for this anthology allows the reader, and happily the reviewer, to set aside the usual hang-ups that go with anthology reading. Small Wonder does not set out to survey or comprehensively collect a field of practice, so who is represented and who is not is an irrelevance. Rather, this book operates in a space that, while guaranteeing the quality of the writing, leaves room for risk and oddity. This is not a collection to be set on a high shelf with the dictionary, the thesaurus, and your completes and collecteds. It is a book to be voraciously read and sumptuously enjoyed, and lent only to trusted, book-returning friends.