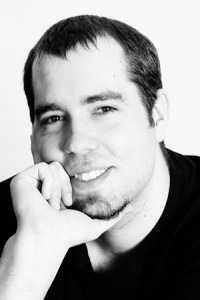 George Saunders is at the top of the pack, not far behind him are David Foster Wallace and Kelly Link. Karen Hitchcock would be my pick of Australian short story writers.

Probably “Adams” by George Saunders. It’s a comic masterpiece. [You can listen to a podcast of this story here.]

I like the opportunity it gives writers to mix around with different styles they may not normally try. If I discover a good novelist, I’m very anxious to get hold of whatever short stories they’ve written.

These days I’d call it dark fantasy. I’ve written in several genres, with short stories I guess my better ones could be called “quirky mainstream”, which probably describes a lot of the authors mentioned above (except Kelly Link, who writes horror.)

I’d say my best short stories are: “Ain’t no ordinary ham” because it’s nice and weird, as well as “Mrs Claus’s Christmas”, because it presents a side of Santa we don’t always see (ie, an elf-exploiting fatass.) I also rate a horror story I wrote last year, soon to be published in a UK collection, called “Hungry Man”. It’s probably the most disturbing fiction I’ve written… I was actually a little shaken afterward for a day or two.

Sometimes from the ether – as in, you just start at some random point and find they lead somewhere (“Ham” was like that.) It could be anything from real life – you see a man frantically fumbling through a pocket for his keys, and you begin to wonder why he was in such a hurry, what was really in his briefcase, etc etc etc… Next thing you know your imagination fills in some blanks and there’s a story there.

Others are seldom involved, I don’t even have proof readers these days. The process differs with each project and very much depends on the nature of the project. Rough drafts come out relatively quickly, then it’s best to let the story sit for a while before rewriting. Many times I’ve submitted something too quickly, and found later it wasn’t ready to go out in public.

Not at all, except by writers. There’s no market for it. It’s a dying art form, as is written fiction in general. People no longer have the attention span for books and our schools are designed to worsen this trend.

Slightly curious to see if this makes writing less or more economically viable for authors to continue with what they are doing. There is an opportunity if it works to bypass publishers altogether, to hell with a 10% royalty rate, how about 100%. That aspect of it intrigues me.

Get your kicks before the shithouse goes up in flames.

Will Elliott is the 32 year old author of four books. His debut, Pilo Family Circus, won five national literary awards and was short-listed for the international horror guild award. His memoir, Strange Places: a memoir of mental illness, was short-listed for the 2010 Prime Minister’s literary prize. He has just completed a fantasy trilogy called Pendulum. His other novel, Nightfall, will be published in 2012.