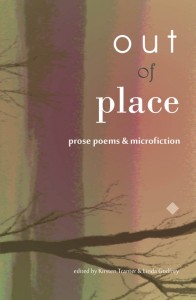 Spineless Wonders will soon release its annual anthology of microliterature. Co-editors, Kirsten Tranter and Linda Godfrey spoke to The Column about how this year’s Out of Place theme came about, what they were looking for from contributors and about some of the pieces they have included. Here’s what they said:

Throwing around ideas for a theme for this book in the microlit series, we thought Travel, with a capital T. Everyone loves to travel, to move, to see different things, to explore. Kirsten moves between America and Australia; Linda would fly anywhere any time with anyone to be able to get away and experience the new.

As we teased out the threads of what it means to travel, it was clear that the experience didn’t have to be about physical movement but could also incorporate writing and reflecting on dislocation, in space, time, feeling, psyche and memory. We asked that this theme, Out of Place, was interpreted as openly, closely, fast and loosely as the writers liked.

What we received were stories rendered in miniature and moments inscribed with precise focus. Australia’s best micro­wordsmiths produced journeys in words that took us somewhere surprising. Travels that showed us where writers started from and where they were going in a different light, newly out of place—a stolen glimpse of a father dancing alone to music; Gothic landscapes on the New South Wales coast; incredible spectrums in the colours of butterflies; Aussie cricket and climate change; remembrances of an exiled home land; a terrible journey to give birth to a dead baby; awkward sexual politics at a funeral. The unhappiness of a couple in paradise; an animal view of human vulnerability; the taste of a thousand-year old egg, and the shape of spaghetti thrown against a wall during a fight: these stories capture delightful and unsettling moments of estrangement, when the new becomes familiar and the ordinary becomes sublime, the point when you agree to accept the strange into your own self. A special mention is made about three entries we received from clients of The Wayside Chapel each telling their story from one place to the present day. Beautiful, poetic and a privilege to be given insight into their journeys.

Our aim is always to bring you the best of short, short writing and to challenge the reader to think big, to give you a taste of the possibilities of the short form and make space for your imagination to continue the journeys started here.

Humorous, weird and breathtaking, full of laughter, irony and grace – these stories will sweep you up, shake you, stir you and set you down again somewhere other than where you began.