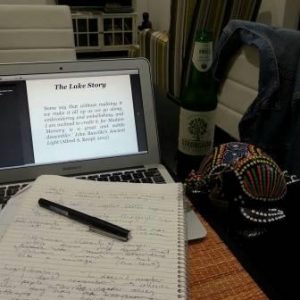 It’s Thursday night. You’re on the train home from work. You’re cheerfully leaving a uni lecture to hit the pub. Or, you’re settling in on the couch at home and about to have the best conversation you’ll have all week.

Its Book Club night. On the Spineless Wonders Facebook.

Emma Walsh gives this first-hand account of the pleasures of an online short story bookclub.

I’ll be in and out, drinking this and cooking steak …

Emma Kathleen Hi Bronwyn! Checking in from sydney uni, gave my self an early mark from class so I could run away to book club. #priorities

Every fortnight lovers of the short story meet online to chat with a writer about their latest publication with Spineless Wonders. Everyone says hi, sends a smile and digitally clinks their bevy of choice with each other while the host, Bronwyn Mehan, starts what bookclubber Amber Dalrymple describes as “a fast typing bonanza” (Bookclub is a typo-forgiving space).

So Claire, the speed thing. Is it exhilerating or out of control (like my spelling).

In just one hour bookclubbers ravenously unravel the mysteries of the latest story. They discuss the relationship between memory, story-telling and truth; the dreams that haunt; the images that linger; the hope of a happy ending; the desires, flaws and triumphs of characters.

I am interested in how memory can be silence and lack of vision – especially in childhood, I think, how much of a veil can be drawn over our existence. Where does it all go? Why are we such unreliable narrators of these times. Or is it just me and thee who feel this Ron Elliott?

I was also struck by the idea of a “fairer truth” – what truths are offered or indeed relinquished/surrendered by the fiction?

When we are kids we can think of quite dysfunctional / weird things as ‘normal’ until we get to school or move into other social milieus. It can be unnerving.

While there is debate about whether these remarkable insights are achieved due to a stroke of genius or that second glass of Cab Merlot it is undeniable the Spineless Wonders Bookclub challenges and deepens your intellectual world.

My chardonnay bids me to ask of bookclubbers and of Carmel: Are we in a different place in 2015? Has feminism and/or legal battles against – and royal commissions into – the churches and clergy made a difference to the odds of whether a young girl can be abused like this and the person who has committed the abuse remain relatively unscathed?

What say you, bookclubbers? And, Marjorie Lewis-Jones, what do the chardonnay leaves tell you?

The leaves tell me to ask your wisdom!

But while the depth of the conversation can leave your mind spinning until next bookclub, its accompanied by light moments of hilarity. While Stephen Webb insists he “make[s] a point of never saying anything insightful” at Book Club he enjoys “dropping in because everyone seems to have fun, including the authors”. Spineless Wonders author Erol Engin agrees, “[it’s] a great way to relax and unwind, support new writing, and just have a great time chatting from the comfort of your living room.” Indeed, conversations can cheerily turn to the reminiscing of childhood TV shows, the consultation of wine for wisdom and the witty banter so typical of language lovers.

Erol Engin you might remember how hard it is to think and read and type all at once – as a guest author!

I have difficulty with those individually too!

Readers relish the chance to start “firing questions at authors about aspects of their writing and lives—because, frankly, where else do you get that sort of access?” asks Marjorie Lewis-Jones. Spineless Bookclubbers agree that the chance to talk with authors about their process, inspiration and thoughts is what makes this book club a stand out, “There’s so much more to a conversation about a piece of writing when you include the person who wrote it! It becomes a celebration of the writing and a sharing of thoughts and ideas, rather than mere speculation. Life’s better with authors,” says Amber Dalrymple.

Claire I was going to ask exactly the same thing. The fox rug. I need to know the inspiration for this detail.

Yes Erol Engin, I set it in the 50s because I thought that the time really emphasised some the restrictive attitudes women could internalise, and which Eunice certainly does. Also that was the time they build the new highway from Ingham to Cairns

Authors value the “rare opportunity” to interact so directly with readers, “Attending the book club as a writer was a truly wonderful experience,” says author Ron Elliott, whose story ‘The Lake Story’ was selected as part of the McGirr Selects Series. “I know the club members were being gentle with me but it was great to hear what was working for readers:  the big stuff like fear for the characters and themes teased out, but also hearing particular lines quoted and then discussed.” The Book Club offers writers a window into the minds of their readers, “Usually you send the story out into the world, and have no idea where it ends up,” says Ariella van Luyn, whose story ‘Bulldozer’ was last Book Club’s feature story, “But during the bookclub, I could hear how readers had made sense of the story, which was so useful for me as a writer. I also realised my readers are awesome, gorgeous people.”

But what’s unique about the Spineless Wonders Bookclub is the special bookish intimacy that can only emerge between lovers of stories, an intimacy that somehow transcends the digital distance. There’s the intellectual rush of being in a community crazy about new ideas. The giddy feeling you get when your new favourite writer likes your idea about their story. The accidental yelling at the screen in excitement when you and another bookclubber have the same favourite line.

So true Emma Kathleen – thanks for pointing out the images of slippage … nicely noticed.

This is why I love this book club Always learning.

And it is this community of people passionate about short stories that compels. “What surprised me about the SW Book Club,” says Erol Engin, “was not only that they seemed to like my story, but how insightful, supportive and fun this community of literary-minded people are. It’s kept me coming back again and again.” Perhaps Marjorie Lewis-Jones says it best, (in all its alliterative glory): “It’s an hour of fun, fiction and friendship on Facebook and I encourage everyone who loves stories—and talking about stories—to check it out.”

Can I just say I love attending book clubs and I have several on the go at the moment (yes I get around), but I have never been part of one with such consistently brilliant material. This is insane! I’ll recommend this series to everyone.

See some of you at Little Fictions.

Emma Walsh is currently completing an MA in Publishing at USyd. She completed her BA at the University of London, majoring in Literature and Philosophy. She works as a freelance editor and part-time tutor for HSC English students (aka full-time counsellor). Her interests include living a whirlwind extravaganza of fire-poi, burlesque, books and internships at Spineless Wonders and Allen & Unwin. Emma is sponsored by coffee.