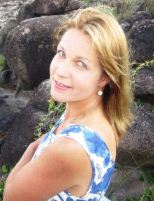 Joanna Atherfold Finn, author of Jesus Sandals and Anchovette and Something for a Rainy Day

The story has an autobiographical dimension so it was inspired to a degree by life events (yes, I was sent to a book parade dressed as a Gumble). It is also a creative response to the idea that wherever you go, you take yourself with you. I was motivated by my interest in the interplay between past and present and exploring characters slightly unhinged by the flux in their lives.

Something for a Rainy Day

I’ve always been curious about surface pretentions. This story was inspired by my interest in contrasting the façade and constraint of a gated housing estate with the freedom and ambiguity of the coastline. The main character is trapped in an illusory life, but the idea of breaking through boundaries is progressively expanded and the coast ultimately represents renewal and transformation.

I think the long story form is quite liberating. It seems to offer a lot more scope than the traditional short story, but it still provides continuity in tone and overall impression. The form is more fluid and allows greater depth in terms of plot and character development. As a reader, I enjoy immersing myself in a story but I also like finishing it in one sitting. The long story form satisfies both of those aspects.

I admire anyone who tries to balance the creative arts with contemporary life. To an outsider looking in, it probably seems a bit indulgent but the reality is a daily attempt to harmonise competing pressures including work and family. I’m very fortunate to be on a scholarship though the University of Newcastle. I have also forged strong friendships with other writers who offer support, humour and red wine, sometimes all at once.

Stories that evolve in the creative space between memory and imagination have always interested me, so the characters, settings and implied insights are drawn from people and incidents in my life. When I started writing ‘Something for a Rainy Day’ for example, I was spending an unhealthy amount of time driving around housing estates, and I quickly developed an aversion to them. The story is ultimately about what lies behind surface appearances. The idea came from my interest in a society caught between the freedom of the landscape and the constraint of artifice.

In terms of process, my chaotic approach is difficult to articulate. To start with, the story is always fragmentary and I very rarely know the ending (or indeed the bit in the middle). Each morning I edit what I’ve written the previous day and then I just keep going until the form starts to emerge. I drink copious cups of tea, and spend a lot of time grinding my teeth and talking to myself. Finally, when I’ve edited a story many times, I present it to my supervisors as a ‘rough draft’.

Because my current interest is coastal writing, I was thrilled to discover Amanda Lohrey’s Vertigo and Favel Parrett’s Past the Shallows. I am inspired by Anthony Doerr’s clarity and grace, Helen Garner and Robert Drewe’s pithiness and Raymond Carver’s spare style. I love anthologies and if I’m feeling uninspired I usually re-read a story that has had a particularly powerful effect on me. Sometimes it is just a single image or a phrase that has caused an ongoing emotional response.

In terms of tricks, going for a long walk is motivating and it helps me find the story’s rhythm. I usually have a few things on the go at the same time, so if I reach a hurdle, I’ll work on something else. Spending time with family and friends always helps. They are a quirky, flawed and engaging bunch which comes in handy in terms of dialogue and characterisation. Writing workshops can be motivating. They are sometimes a bit brutal, but they shine a light on ambiguities or failed attempts at humour (and you get free biscuits).

Joanna Atherfold Finn writes and teaches in Port Stephens. She has had short stories and articles published in anthologies and journals. She received the University Medal in English and is currently completing a creative writing PhD at the University of Newcastle.