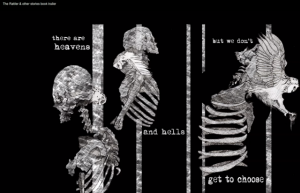 LG: How well do you think the book trailer represents the collection, Alec?

ASP: Film trailers offer a montage of already recorded voices, faces, locations, etc, but a book trailer doesn’t have the same luxury. A book trailer is generated by words and are the result of how these words have impacted the artist putting together a presentation. Hopefully they will have the same impact on another viewer/reader. Words are still the most elemental, primordial sparks firing between people and we are each looking to be set alight by them. That, as much as anything, is given dramatic form in the book trailer created by Evelyn Araluen Corr for The Rattler & other stories.

LG: When we look at the book trailer that Evelyn made for your collection, it seems based on one story, B O M B S; a beautiful evocative story of a plane load of people preparing for, and reflecting on, their last minutes of life. And though the characters from this story appear in other stories through the collection, this particular story does not represent the whole collection, which is much more grounded in everyday life, everyday characters in suburban Melbourne. When you sat down to put together a collection of stories what was the driving force? Was it just the stories you had, or was there some guiding principle?  Is it a Melbourne collection?

ASP: A writer might set out to write a book, whether novel or collection, with some very clear ideas and then find a great many erupt from the book itself. The initial ideas can end up being the most minor features in the final draft. What’s most alive are those elements that break through the page—surprising both writer and reader. Araluen Corr seems to have been inspired by the two most experimental stories in The Rattler.  In one story there’s an explosion and in the other story there’s an implosion, but for her, they connect in that moment between inhalation and exhalation. Most of the text she uses is derived from ‘Prayers for Cracks in the Concrete’ and the coda is taken from the story,  ‘B O M B S’, but she uses visuals from many of the stories in the collection. More than anything her trailer embodies creative impact and the way certain elements crucial to our own needs implode and then explode as we breathe in and then exhale into a diastolic of art.

I’m not sure I could call The Rattler & other stories a Melbourne collection. There are books by Russians, Americans, French, etc, that are all about a particular city, whether it be St Petersburg, New York or Paris, but The Rattler & other stories isn’t that kind of travel guide for Melbourne. All of those cities have had their day and yet a city can be a force of life to a writer—it has a vast array of roots and branches, and occasionally it flourishes, and it is breathtaking to be a small part of that surge of life when it blooms. So while I’m not sure if my book is a Melbourne collection I am certainly a Melbourne writer.

LG: What about the novella in the collection: The Rattler? Quintessentially Melbourne, (and it was shortlisted for the Lord Mayor’s prize). The characters are hilarious. The big black chair is a character itself. Tell us more.

ASP: ‘The Rattler’ is about a Melbourne tram driver who goes off the rails. Atticus O’Neill is also a closet writer who has been living a diminished life for decades. Then when one Tuesday afternoon, he comes home with ‘a monster of leather and chrome. Big. Black. Brutal.’ An outsized office chair that barely fits behind his small desk at home. Going back to that small tram life becomes impossible for Atticus O’Neill.

I was inspired by Gogol’s masterpiece ‘The Overcoat’ in which a similarly diminished man finds his life overturned by an everyday object. If ‘The Rattler’ had stayed bound to that office chair, so to speak, it would have remained nothing but a comedy. It kept growing from that straightforward short story farce into a layered novella. There was a huge influx of Melbourne energy, of characters and places, but what fed the more essential growth was the question of what literature means to Atticus O’Neill. He’s getting older, has fewer and fewer options for work, romance, life in general, yet he intuits that literature opens channels to an internal world which continues to grow, getting deeper and more potent, and it’s here that he can find a vital and vivifying connection.

A. S. Patric, writer and bookseller, lives in bayside Melbourne with his wife and two daughters. The Rattler & other stories, his debut book, was published by Spineless Wonders to wide acclaim in 2011. His second collection of stories, Las Vegas for Vegans, published by Transit Lounge, (October 2012) has been shortlisted for the Queensland Literary Awards (Steele Rudd Award for short story collections). Bruno Kramzer is a third book and will be published by Finlay Lloyd in October 2013. Bruno Kramzer was shortlisted in the 2013 Viva la Novella Competition.