Our small wonder prose poem/micro fiction competition kicked off on October 16 and so we thought it timely to reflect on the fine tradition of prose poetry in Australia. This week on The Column, Ali Jane Smith reviews The Indigo Book of Australian Prose Poems, Edited by Michael Byrne (Ginninderra Press, 2011). 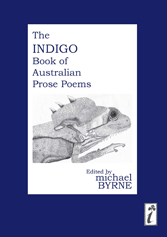 Opening an anthology of prose poems, like opening a box of chocolates, is a moment for an intake of breath. The texts are neat and square, and there is promise of variety in the taste and texture beneath the visual uniformity. As the first anthology of Australian prose poetry, The Indigo Book of Australian Prose Poems is a welcome, indeed necessary, addition to Australian poetry in print.

Editor Michael Byrne has brought together a varied and accessible selection of Australian prose poetry. An emphasis on readability, especially for students, over a more scholarly approach has perhaps informed some of the editorial decisions. I enjoyed the way in which poems are arranged so that they pick up on thematic links from one poem to the next, and this rewards the reader who follows the anthology from beginning to end, but I would have appreciated biographies of each poet included in this volume. I also found it frustrating that the contents is a list of titles without poet’s names: instead, there is an index of poets at the back of the book. This decision might have been made to encourage readers to focus on the poems themselves, rather than scanning the contents page for favourite poets, but it seems an unnecessarily didactic measure.

Some of the selections in this collection of poems published from the 1970s to the present are interested in narrative, some play with narrative, and some are non-narrative. Some are engaged with language-play, others use conventional syntax. The collection might be described as a spectrum of the prose poem with, let’s say Ania Walwicz at the experimental end, and the editor himself amongst others at the narrative end. My own preference as a reader is toward the experimental, and I would have been happy to see more play and less narrative in the collection overall. Some of the poems here are from poets who write almost exclusively without line breaks, some have published books of prose poetry, while for others the prose poem is an occasional excursion. Poets who are men outnumber poets who are women almost three to one in this collection, a ratio that surprised me considering that the prose poem is a form that has proved rich ground for many women working experimentally with language.

On the evidence of this collection, and my previous encounters with the Australian prose poem, I would argue that Australian prose poetry owes its origins to interest in both French poetry of the nineteenth century, that is, those poets who are widely regarded as the founders of the form (Baudelaire, Rimbaud, and Mallarmé, amongst others), the unique Gertrude Stein, especially her Tender Buttons, and late twentieth century American poets, with a little sprinkling of the bush yarn in places.

The form allows the poet to play with standard usage and punctuation to create works that are cohesive but not necessarily coherent. Humour is also a noted feature of many prose poems, though the temptation to use the form like a joke or a fable, to deliver a punch line or a message, has not been resisted by every poet included in this collection.

There are so many poems to be enjoyed here: a lovely meditation on earthy fecundity by Miriam Wei Wei Lo in her poem Searching for Words; Rob Riel’s joyfully erotic Love, Mid Afternoon; the  unmistakable world of Sam Wagan Watson; John Tranter’s Seasons sequence; the always stunning Ania Walwicz; several works from the always excellent Joanne Burns; a sequence from John Scott, who continues to operate across the boundaries of poetry and prose in recent work that has appeared in literary journals. There is a substantial selection of work from Gary Catalano and Alex Skovron, and a tantalising taste of the work of other poets, including Anna Couani and Susan Hampton. Reading this anthology will, happily, lead me back to my library and bookshop, hungry for more Australian prose poems.

Ali Jane Smith’s first poetry collection, Gala was published in 2006 as part of the Five Islands Press New Poets Program. She has been the recipient of a Longlines Residency for Regional Writers at Varuna — the Writers House. Her work has appeared in publications such as Southerly, Cordite, and Mascara Literary Review.

Infectious Fictions Ep 33 To And From My House