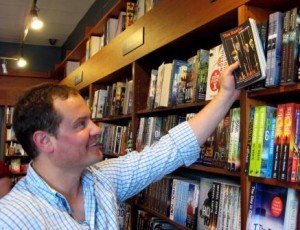 Lydia Davis comes to mind first. That term, short story, sometimes gets redefined. What it means. What’s still possible. Lydia Davis cracks open words and out spills new DNA. Everything is changed. I am no longer who I was. I’m part of something more interesting, more unknown yet better understood. These are the kinds of writers I love best. Then there’s that Hemingway bravado of the sentence, Wells Tower and that elusive electric connectivity of his stories. There’s my splendid personal troika, Updike, Cheever and Paul Bowles. The humour and humanity of Keret. That Russian combination of grit & grace in writers like Gogol, Chekhov and Tolstoy. Lahiri has such a lovely kind of pathos and sense of family and place. There’s Philip O’Ceallaigh, Joe Meno, Andre Debus, that have all thrilled me again and again. There’s the tragically ignored genius of Ivo Andric. There are glorious women like Flannery O’Connor, Grace Paley, Lorrie Moore and Deborah Eisenberg. All of these writers and others have broken me open and tampered with my DNA.

Tolstoy’s Death of Ivan Ilych killed me. Which is to say, gave me the experience of death–> relentless and certain. That sense Tolstoy had of meaning coming from tragedy, and his incomparable spirit, which breathed life through words and made my entire skeleton glow like coals in a fire. The Damned Yard by Ivo Andric, How to be the Other Woman by Lorrie Moore, Some Other, Better Otto by Deborah Eisenberg, Sir Fleeting by Lauren Groff, The Overcoat, by Gogol, all force themselves into this answer. More want to come through but I’m going to skip to the next question.

I hope my writing has a balance of qualities. Readability and experimentation. Diversity and coherence. Humour and insight. Lightness and weight. Density and clarity. Sincerity and bravery. Modesty and audacity. More than anything, I hope it’s just good, solid storytelling.

Movement & Noise. Of course there’s that feeling of choosing your favourite child, but I’ve had about 60 such children and the truth is that some of them come out bright and strong, robust with a kind of life you yourself don’t own. There’s the occasional story that feels wayward, even troubled, though I can’t think of any I’d actually disown. Movement & Noise is a piece that fills me with a sense of fatherly pride every time I look at it. It’s the sense that it is as well made as your love and luck can manage.

Ideas comes from genius. That’s not something anyone can be. It’s not somewhere you can live but it’s within us all and we recognise it as something within ourselves when it’s reflected in another person. So a writer pulls a rabbit out of a hat–> one that we’ve been wearing.

I recently wrote a novella called The Action. It started as a conversation, at work, with a friend. Since we spend hours in that bookstore we’re both employed in, we’re always talking about writers. We started chatting about Kafka and I thought about that famous scene where Joseph K wakes up one morning in The Trial. I asked my colleague, wouldn’t it be cool to write a story from the perspective of one of the men that comes to arrest Joseph K. I wasn’t serious. It was almost a joke, but his face lit up, and at that point I knew I had to write it. I was surprised that it kept opening up the way it did, especially since it was set within Kafka’s geography and generation, and most of my stories are proudly Melbournian. If I think about it, I suppose the reason is that while The Action isn’t Kafkaesque at all, it was a response to the immense influence he had on me when I was in my early twenties. I spent a year or two in his company, day and night. It wasn’t always pleasant but it woke me up to a deeper sense of humanity. The Action is something that came from the genius that Franz Kafka really did seem to make all his own.

I could write books on Process. I think it’s the big question of any kind of creator’s life. Because how we get beyond our own blah-blah, our mediocrity, isn’t easy. I like that Nietzsche quote, ‘Truth is a mobile army of metaphors’. I feel like I need to keep coming up with new metaphors for every new project so I’m not just repeating the same kind of shit again and again.

For example, I used to think about traffic lights in writing. We begin with a green light but soon come to a red. While we work out the direction of the piece, familiarise ourselves with the landscape, deal with road rage, cats darting across the road, we negotiate greens, ambers and reds. I threw away all that allegorical junk and thought about how I could get to a place where it’s green lights from start to finish. I got to a point where I could write a 5000 word story in a day but then there are stories that dwell in those red lights for a year or more, and they’ve got value as well.

Recently I started thinking about stories like they are bubbles in the no-space of (un)consciousness. We can leave a story for months or years and if we’re careful, we can re-enter the space of that story and continue as though nothing has changed at all. Or if we think about something like Chekhov’s Lady With a Little Dog, I think what we love about it, is that it’s such a pristine, perfect little bubble.

And yes, people are always part of the process for me. Everyone at work is constantly getting pestered by me and my stories. What we are doing is communicating so I’m always eager to transmit. Since you become very annoying very quickly, doing that, it’s best if you can find people who actually want to tune into your station. Being attentive and respectful of any and all responses is of course vital.

No, I don’t think it is. Whenever I encourage customers to read short stories in the bookstore, there’s the usual prejudice of ‘Oh, no, I don’t read short stories.’ All you can do is light a candle and not curse the darkness but I’m still trying to work out how to build a nuclear bomb in that respect.

Well, they say we’re seeing the end of print media. How do I feel about it? For some reason the Kubrick film pops into my mind–> Doctor Strangelove or: How I Learned to Stop Worrying and Love the Bomb.

Learn how to meditate.

(That’s a joke even though I’m totally serious. It’s the best advice I can give any writer.)

A. S. Patric writes in Melbourne and is a St Kilda bookseller. Alec is featured in Best Australian Stories 2010 and has also found publication in literary journals like Overland, Wet Ink, Quadrant, Etchings, Going Down Swinging, Page Seventeen, The Victorian Writer, The Diamond & the Thief, Blue Dog, (untitled) #2, Blue Crow, Miscellaneous Voices, Dot Dot Dash, The Lifted Brow, Blue Giraffe, Stop Drop and Roll and the Australian Poetry Centre’s publication, Dear Dad. His novella, The Rattler, was shortlisted for the Lord Mayor’s Creative Writing Award and received a High Commendation. His crime story, Hemisphere Travel Guides: Las Vegas For Vegans, won the 2011 Ned Kelly/S.D. Harvey Award. Music For Broken Instruments, his first collection of poetry, was published in June 2010 by Black Rider Press. He has taught Creative Writing at RMIT and is co-editor of Verity La, an online journal that is archived by the National Library of Australia. Alec was a judge in the Essence of St Kilda Word Prize 2010.

Alec’s short fiction collection, The Rattler & other stories is published by Spineless Wonders and will be launched in Melbourne on Friday, 21st October.