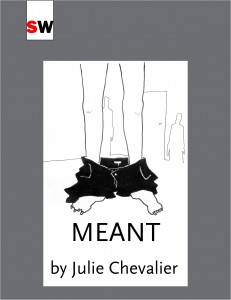 Next on the Spineless Wonders online bookclub, we will be discussing ‘Meant’ one of the linked stories set in Sydney’s Long Bay jail from Julie Chevalier’s collection of short stories. In the article below, Julie talks about the stories and how they came to be written.

Whenever I give a talk about Permission to Lie I’m asked, ‘How did you get inside a jail to do research?’ and ‘Can you help me get inside?’

Permission to Lie is a collection of twenty stories set in Australia and the US. Seven of the stories are a discontinuous narrative set in Long Bay, a complex of correctional centres in Sydney, Australia.

For six years in the late 1980s I worked in various Sydney jails, including Long Bay, as an art teacher, senior education officer, and drug and alcohol worker. I worked in minimum and maximum security, men’s and women’s jails. I considered it a privilege to be paid to travel in a country where I was unfamiliar with both the customs and the language, but I was far too busy surviving to think about research. Keeping a journal and talking hysterically to friends and family helped me process the shocking events I witnessed and was told about. After my work and home phones were tapped and my office at Parklea Prison was bugged, I suffered from paranoia. My friends said I was too suspicious; my colleagues said I was not suspicious enough. Everyone agreed I should find another job. When I finally accepted their advice, I felt bereft and longed to talk to people who had been incarcerated or worked on the professional staff – people with whom I shared experiences. Eventually I wrote.

‘This Awful Brew’ is set in the visiting area of a jail. It is told from the second person point of view by the former principal of the jail school, Cathie, who is visiting Gav who had been her inmate clerk.

The whole room throbs. You turn in time to see Max’s hand move under his lady’s skirt. Probably she isn’t wearing knickers. Gav says she tapes a sawn-off fit loaded with heroin to her thigh, a take-away for Max. Are drugs more a commodity than sex? You can never figure it out. That’s Berko coughing, the one whose missus claims she got pregnant in this room. You cross your legs and check out what a toddler conceived during a jail visit looks like. Brown eyes, sticking-out ears, and sticking-up brown hair – just like Berko. The air, thick with volatilised juices, wraps around you like a body suit of sperm, sweat and sour breast milk. Thank goodness for cotton knickers.

The legs of Gav’s chair scrape on the cement. Screams and swearing bounce off the high gloss walls. People intertwine like pretzels – hands down neckbands, hands under shirts, hands up skirts, hands down pants. Berko’s clone, snot dripping from his nose, careens into the legs of your chair.

‘This awful brew,’ Gav places the coffee on the table.

You drain the last bitter drop and dig your right thumb nail into the bottom edge of the polystyrene until crescent-shaped dents ring the bottom, like the moon has orbited for the entirety of someone’s lagging, one crescent for each month. He jiggles his legs.

I needed to get the details of the place right before the story feels authentic. I needed jargon – Max’s lady, a sawn-off fit, Berko’s misses, lagging – to write these stories. I needed to know visitors could be offered coffee, and how heroin was smuggled into visiting areas. I’ll probably never write about a place I haven’t lived in or visited. I’m too scared of violating a reader’s trust.

Once when I was teaching high school I had a dream where the students and teachers co-starred with dead family members and friends who lived overseas. There was even a dog who escaped time and geography to make a guest appearance on that hill in North Ryde, New South Wales. If dissected for truth, my stories might to be like this dream of merging, but mostly I just make things up.

But let me tell you how I evaded doing medical research for Seeing the jane, the last story in Permission to Lie. The character of a World War I veteran needed chronic medical conditions. He needed to be well enough to move from New Zealand to Sydney, but too frail to live independently. I gave him my father-in-law’s array of medical conditions. Just back story, I told myself. This worked so well I gave the elderly man the role of father-in-law and then threw in some of his sayings (doing the messages, the Big Slump, seeing the jane, a wee drop, the shakes, Saida bints). In the story the New Zealand veteran unexpectedly arrives at a Sydney terrace house where his widowed daughter-in-law lives. Although she barely knows him, the woman allows him to move in.

In some ways he replaces her husband who has died. They argue, about the doctor:

‘I hate it when you call her the jane.’

‘About gender.’ My voice is too loud

He leans forward and cups his hand around his better ear. ‘About what?’

Dad pulls himself up straight.

But, because he needs nurturing, he becomes a substitute for the child she wanted.

Using a man who had been dead thirty years in this way seemed ethically messy, so I asked my ex what he thought. He was charmed by the courtly frail gardener I created and liked the idea that Dad’s memory would live on. So generous.

Seeing the jane was broadcast on the radio on the morning of Mothers’ Day a few years ago. Choosing a story without a mother or a child for this day was odd, I thought. I left my daughter, son-in-law and noisy grandkids at my place and drove my car around the block and parked in the sun to listen. Who listens to ABC Radio on Mothers’ Day? People who don’t have houses full of children and grandchildren. A brave and suitable choice, I decided.

Eric Barnes mentioned in his Research Note that he becomes confused about what really happened and what he made up. Elizabeth Bishop, in a letter to Robert Lowell says about Mary McCarthy, ‘Who can doubt that Mary really lives in her books? If she ever loses her mind, she’ll never know which parts of her life she lived and which she wrote.’ (p 174, Words in Air, The Complete Correspondence between Elizabeth Bishop and Robert Lowell). While I am writing early drafts sometimes I consciously use part of a real incident or person, but as time passes and more drafts accumulate, the written story becomes more vivid than the memory that triggered it. Like being trapped in the encyclopaedia of imagination.

To purchase a copy of ‘Meant’ or to find out more about Julie’s writing, click here.

To find out about the Spineless Wonders Bookclub, click here.