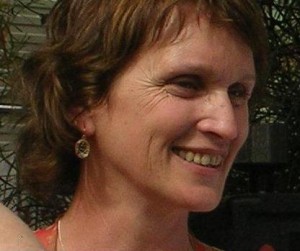 The most memorable short story I’ve read was an American story called ‘Berceuse’. I don’t remember who wrote it. I was about nine or ten and it was in a short story anthology from my father’s bookshelf. The narrator was the writer, and it was all misspelt. ‘Berceuse’ meant ‘Because.’ It was a love letter from a young girl, a poor girl, to an older and more powerful man who had abused her. I remember it because it was so heartfelt, and I liked the bad spelling.

The short story form is fun. Writing one is like going for a gallop. You can pretend to be someone else for a while, very intensely but not for very long. You don’t have to explain too much, and you don’t even need to fully understand the characters or the plot yourself– I like this.

My writing can tend to be a bit obscure. Feedback is always good, to see if I need to make things clearer. My stories are about the human condition – mostly love and death. They’re often sad but can have funny moments. They’re never about me, always about more interesting people.

I’m always in love with the latest story I’ve written. Then it’s replaced by the next. It’s probably because I love the work of writing more than the finished article.

Ideas for stories come from my short preoccupations, images that stay in my mind and stored notions. They somehow become synthesised in my mind after rattling around together for a while, and a story forms. There’s usually an image I can’t stop thinking about, and other images and notions gravitate towards it and they all stick together as if it’s magnetic. I know an idea has taken hold when things happening around me refer to the story. It’s not magic but there seems to be a strange subconscious interest at work at those times. I’ve just finished a story that found its expression from a chocolate box, but it fitted with a thought from years ago about pearls, and those images let me tell a story about getting old and dying. I’d wanted to tell the aging story for a long time but I couldn’t do it until those images – the chocolate box and the pearl – had come together. Even then, it couldn’t go anywhere without me reading up on geology. The mind seems to grope around and find the right elements and make them into something new. I trust it, including when it feels like nothing is happening.

Short stories take only a month or so to write. But I think about them for a long time before I compose anything. I keep a notebook for images and ideas. When I’m happy with a story I show my husband and my son. They’re pretty good for feedback. I send short stories to competitions for feedback. It’s encouraging to be commended or even win something. I submit stories to literary journals and any publishers who are inviting submissions for anthologies. There’s nothing to lose.

Short stories are becoming more popular and there are more collections appearing. Some people say they don’t like short stories because they are always cryptic, but I think this is changing.

Earlier this year, my short story, Jap Floral, was read on ABC radio as part of their Sunday Story series. This was wonderful, and the actor who did the reading was perfect. It’s good to listen to a story. I wish radio would do this more.

Claire Aman grew up in Melbourne and has lived in Grafton for the last 23 years. She works as a town planner and writes in her spare time. Gillian Mears has long been an encouraging presence and Varuna, The Writers’ House and an ASA mentorship have also helped cultivate her writing life. Her short stories have been published in Escape (Spineless Wonders) Scribe’s New Australian Stories 1 & 2, Black Inc.’s Best Australian Stories 2008 and in Southerly, Island and Heat.