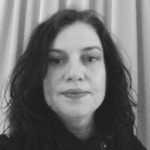 This week we talk to Jennifer Porter about her piece ‘Ochre’ which appears in Landmarks, the latest anthology curated by Spineless Wonders. During this interview we discover Jennifer’s favourite Australian landscape, who inspires her writing and what inspired her mirco-lit ‘Ochre.’

The skyline of Melbourne city is a landmark for me, especially approaching the city from the north, along the Hume highway. When the city comes into view it feels like I’m coming upon the Land of Oz. I can see it from my home in the suburbs too. In the busy shifting of everyday life, it remains a constant, a reminder of possibility. It probably stems from having grown up in the country. It still holds mystique and excitement.

What inspired you to write ‘Ochre’?

I wanted to explore the idea that when the landscape of your life shifts unexpectedly or violently, familiar constant landmarks can be a buoy to cling to and gain reassurance from. I’m also interested in the notion of ‘mother earth’, how the land can act as a surrogate parent in some ways, from which to gain comfort or upon which to enact anger and despair.

I write on a large deco dining table, which we use to eat off, draw on and work on. I either write there or propped up in bed. The house is small and we have young kids, so sometimes it’s the library.

Christos Tsiolkas and Lionel Shriver have both provided inspiration by their tackling of issues and emotions that are not necessarily palatable or spoken of. Helen Garner for her precision and again, for tackling difficult topics with insight and intelligence. In complete contrast I have spent a lot of time reading Victorian era women’s fiction, like the Brontes, Austin, Eliot. For beauty I read Cate Kennedy and Dorothy Porter.

Jen Porter has written reviews for ArtsHub and has had work broadcast on Radio National. Her adult novel manuscript, In Your Image, has been shortlisted and longlisted for a number of national and international literary prizes. She also writes poetry, short stories and childrens’ books, some of which have been published and shortlisted. Jen is currently participating in the 2016 Hardcopy program and will travel to the Philippines to take part in the WrICE program in 2017.