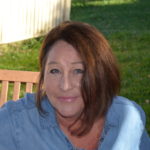 This week we discuss the short story form with Newcastle fiction writer, Maree Gallop. Her short story ‘Lost in Translation’ appears in Landmarks, the latest anthology curated by Spineless Wonders. During this interview we discover Maree’s favourite Australian landscape, who inspires her writing and what inspired her mirco-lit, ‘Lost in Translation.’

A significant landmark for me is my favourite fishing spot in Lake Macquarie. The location has been passed down through my family. We launch the boat at Swansea boat ramp and motor out through the channel markers (affectionately known as “the sticks”). On the starboard are small sand islands and on the portside sea grass beds that are well known for bream. At the last set of “sticks” we head south toward Pulbah Island and at just the right location, slow down to line up three chimneystacks at the power station that are visible on the starboard. They should now appear as one. A single stack becomes visible on the portside and peeks from behind the southern point of Pulbah. We anchor in a deep part of the lake and await the feisty bite of a bream or tailor or the distinct feel of a flathead as it lays on the line, heavy and ready to run.

What inspired you to write ‘Lost in Translation’?

My husband and I camped at the Wurrumbungle National Park years ago. We took in the rugged volcanic landscape around us as we hiked to The Bread Knife; a natural landmark left after years of erosion and a symbol of resilience and strength that goes on and on. Lost in Translation started out as a thread of an idea about relationships, miscommunication, loss and regret. A process of automatic writing and reflective thinking led me to explore the inevitable changing nature of human relationships and the evolving nature of the landscape in which we live. Themes unearthed were at an individual, global and geographical level and included concepts relating to the desire to conquer each other and the land rather than being submerged in the experience and savouring the beauty. My goal was to creatively capture the essence of the story, even if only on a subconscious level through deliberate word choice and metaphor to add depth and layers. The characters had to represent something bigger than them selves.

I love writing to a theme. It both constrains and enables me. It constrains my focus to a single topic and is particularly useful in micro fiction where every word counts. It also enables me to go deeper into a topic rather than expanding on it. In this way I’m able to hone my craft to add depth, layers and meaning to a bite sized story. My love of metaphor helps me express ideas in fewer words.

My space varies according to time, season and mood. Without the luxury of a study I need to be flexible. Early mornings start with a cuppa and notebook in bed. On winter days I sit at our Tasmanian Oak dining table with my back to the sliding glass door and absorb the warmth of the sun or in the front entrance on my old roll top writing desk. In spring and summer the deck beckons. A mother magpie eyes me suspiciously protecting her babies in the nest built in the neighbours Paperbark that partially shades our backyard. Bees and Rosella provide background noise in the Grevillea and Bottlebrush in our garden and a curious and sometimes intrusive Boarder Collie named Luna sits by my side. However, Lost in Translation was mostly written in my car whilst waiting for my daughter at drama lessons. With a headlamp torch strapped to the sun visor and driver’s seat pushed right back, I scribbled ideas that flittered through my mind and eventually the story was created.

Many writers have inspired me. Dr. Seuss, Enid Blyton, Daphne DuMaurier (to name a few) and more recently Marion Halligan and Tim Winton. Halligan’s use of subtle metaphor adds depth and meaning to her stories and her ability to view the familiar world through an unfamiliar lens and leave the reader to ponder the new unknown is genius. Winton’s connection to land and spiritual-like experience of submersion in his environment is reflected in his unique writing style, which resonates with me.

Maree Gallop is a Newcastle fiction writer and nurse with a Master of Mental Health Nursing. Since 2012 she has won several awards, and was runner-up in the Hal Porter Short Story Competition 2014. Her stories have been published in The Newcastle Herald and various anthologies: Grieve 2013 and Newcastle Short Story Award 2016 (HWC), Mirrors (e-book), Watermark and Home is the Hunter (Catchfire Press), Brio (Toowoomba Writers Festival Literary Prize and FAWQ 2015) and Award Winning Australian Writing 2016 (Melbourne Books). Maree values community engagement and has presented at the Newcastle Writers Festival in 2014, 2015, 2016, contributes to ABC Open projects and appears regularly on 1233 ABC Drive ‘Finally Friday’. Her first novel is underway.