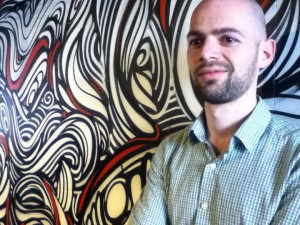 The 2016 Slinkies eSingles are now out, and we are excited to share this series of  interviews with under 30 emerging writers. Here, Slinkies‘ publicist, Ashley Mounser throws Laurence Levy-Atkinson, author of ‘Farblondzhet‘ some questions about his story, the influences on his writing and about where to next.

Have you had a similar experience to the one depicted in Farblondzhet?

Absolutely. A few elements of the story are auto-biographical like being an atheist and a Jew, attending the orthodox funeral of a loved relative. The confrontation between orthodoxy and my own sense of values is something I’ve lived and wanted to share because it’s kind of a strange thing to experience, particularly coming from a group whose culture and religion are so intertwined that it’s sometimes impossible to split one from the other.

What made you decide to not tell the story from the perspective of Abbey or Max? 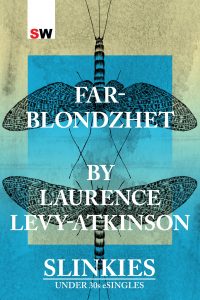 Having a peripheral narrator tell someone else’s story is something I find myself defaulting to more often than not. To be honest, it probably says more about me than it does about my stylistic choices. That being said, I do really love the freedom it gives you. As an almost impartial party, it allows you to give perspectives on the other characters’ actions that they themselves couldn’t necessarily state in so many words.

There’s probably a couple of ideas in the story that I can’t really help but write into a lot of what I create. One would be the conflict between culture and values, and what that means for the person stuck in the middle. The other would be the idea of people with some sort of deficit in themselves looking for a way to fix it but not knowing how, like Max in the story.

In the absolute interest of brevity here, I’ll limit the excited kid in me to a couple of short lists.

My favourite books, or at least the ones I’ve never stopped thinking about: Le Grande Meaulnes, Norwegian Wood, Moby-Dick, Mrs Dalloway, Journey to the End of the Night, A Farewell to Arms, and Voss.

In terms of influence, it’s probably easiest to say that the books and authors above essentially taught me how to write. And almost as importantly, they helped me figure out what I wanted to be as a writer.

The thing I like most about short stories is that you can really strip away all the extraneous details, all the exposition and scene setting, and just hone right in on what matters. I like the directness that a short story allows. That and the re-readability factor. It’s wonderful to be able to pick up a story that means something to you and be able to relive it again in one small sitting, the way you would a poem. I think maybe that’s why short stories tend to stick with me.

What other projects are you currently working on?

The main project I’m working on is a novel about a group of friends on schoolies week, diving headlong into adulthood while trying to dodge the responsibility that comes with it. It’s a book about freedom, running and brotherhood, and a narrator trying to hold onto the romantic ideals of his past while that era is quickly coming to an end, whether he’s ready for it or not. And while I’m avoiding editing it, I’m writing poems and short stories because my discipline as a writer hasn’t improved much since I was six years old.

Laurence Levy-Atkinson is a writer and poet based in Melbourne, Australia. His work usually explores themes of identity, culture and history and can be found in Poetica Magazine, A Quiet Courage and 101 Words, among others.

The 2016 Slinkies eSingles were curated by Emma Wortley with editorial assistance by Cherisse Kelly and Martin Veres.You can grab a copy of ‘Farblondzhet’, check out the other Slinkies from previous years and find out how to submit to the Slinkies Under 30s program, here.