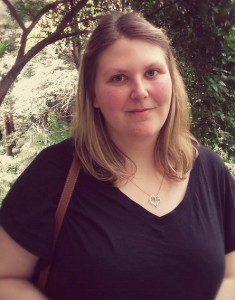 The 2016 Slinkies eSingles are now out, and here is the first of our interviews with under 30 emerging writers. Here, Slinkies‘ publicist, Ashley Mounser throws Kyra Thomsen, author of ‘Buzzing’ some questions about her story, the influences on her writing and about where to next.

Did you grow up with kids like the ones in your story?

Absolutely. I grew up in a suburban town on the south coast and the characters in ‘Buzzing’ are typical of the boys I saw every day of high school. They were pretty crude. There are countless lewd and violent incidents I remember, and looking back on them I almost can’t believe it was really like that.

A lot of the story elements are taken from my real-life experiences. We had a spot called the Dirt Patch where kids would fight, and we had a ‘gang’ of teenage boys who would graffiti things and bully people.

My father taught science at our school, so most of the time I would stay back and hang out in the faculty lounge, waiting for a lift home. That meant that I missed almost all the fights that went on at the Dirt Patch after school. (The only fight I ever saw at the Dirt Patch was one where my father stopped our car in the middle of the road to break it up, and I had to sink down in the seat out of pure embarrassment!)

So ‘Buzzing’ was a story where I was completely out of my comfort zone — I’ve never been in a fight, and I’ve never been a teenage boy. It was a really interesting experience to get into such a difference headspace and write the story.

Where did the inspiration for the power plant angle come from? 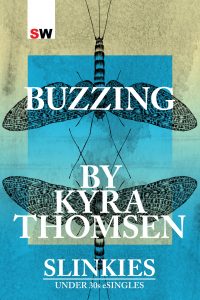 The power plant was a real thing too. The ‘power plant’ is actually an energy generator that was nearby our school. It made this buzzing sound, as I describe in the story, and we basically just ignored it. It was a normal thing.

But having been out of school for a few years, having some distance and some perspective, I suddenly remembered the generator and the sound, and then a lightbulb came on in my head: the Dirt Patch was right across the street. What if the two were somehow linked?

That’s about as far as real life comes into the story. We never had protests or anything like that. It was interesting to re-imagine the high school I knew so well in a new reality, to push the boundaries and the ‘what if’.

One of my favourite authors, stylistically, is Ernest Hemingway. I’m a big fan of his ‘iceberg theory’ because I found that a lot of my writing navigated narrative and characters on a subtext level. I also really enjoy sparse writing, and focussing on the rhythm of the sentences and the language used. I get a lot of enjoyment out of the smaller details.

As for books, I always cite my favourite as A Visit From the Goon Squad by Jennifer Egan. The novel is like a series of short stories that interweave, and I love that. It was one of the first books I read that I wish I’d written.

I’ve always found a really good rhythm with short stories. What I mean by that is, when I’m writing a short story I have a certain ‘feeling’ that carries me through. I’ve tried a few times to write novels, but I lose interest at around 10,000 words.

When I write short stories, I’m present for every second. If I can, I’ll write a short story in one sitting (sometimes two). I need that immediacy of the setting and characters and the inspiration for the story, otherwise I’ll lose the rhythm and the feeling is gone.

I think the same thing happens when reading a short story, too. If you read something in one or two sittings, it encapsulates you totally. I love that feeling of getting to the end of a short story and having that ‘a-ha’ moment — it’s nice to see how authors can do so much with a story in so little space.

What other projects are you currently working on?

I’m not currently working on anything major, just writing as many stories as I can and submitting as much as I can. I try to write a few stories every month and then workshop them or go through drafts. It’s a very cyclical process, so I’ve always got something on the go.

It would be nice to select some of the better stories and put them into a collection someday, or perhaps try writing a novella, but that’s a while away.

Kyra Thomsen is a writer and editor from Wollongong, Australia. She studied at the University of Wollongong and was the winner of the Questions Writing Prize in 2012. Kyra has worked with several literary publications, has been published numerous times both in print and online, and is Deputy Editor of Writer’s Edit.

The 2016 Slinkies eSingles were curated by Emma Wortley with editorial assistance by Cherisse Kelly and Martin Veres.You can grab a copy of ‘Buzzing’, check out the other Slinkies from previous years and find out how to submit to the Slinkies Under 30s program, here.