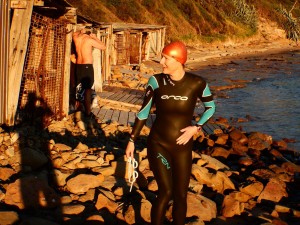 What do microfiction, ocean swimming and loopholes have in common?

Nicole Schalchlin talks to Susan McCreery, author of the new microfiction collection, Loopholes, to find out.

Driving down the windy road of Bulli pass into the beachside suburb of Thirroul near Wollongong, there is a down-to-earth calmness and authenticity that inevitably seems to settle in. At 6am, you can find Susan McCreery, with that same calm and authenticity, at the water’s edge of neighbouring Sandon Point, clad in a wet suit and swimming cap, ready to plunge into the chilly waters with her ocean swimming squad. As a writer, professional proof-reader and mostly solo parent to two teen boys, ocean swimming is her escape – it allows her to only focus on how good it feels to be in the water, particularly when the sun is rising. “I adore it”, says McCreery. “It is almost like a creative act in itself. You kind of find your essence in nature. And with writing you are trying to find the essence. The truth.”

Loopholes, a collection of microfiction

This essence or truth has been poignantly captured in her latest book, Loopholes, a collection of over 60 stories, to be proudly published in December by Spineless Wonders, and inspired in part by French Poet Baudelaire’s Le Spleen de Paris. As Baudelaire brought frank insight into the urban alienation in 19th century Paris, McCreery’s so too reveals the complexity of 21st century western life though the lens of family, relationships, love, loss, growing up and aging. Her characters are rich and complex. “I do like writing about people who are flawed or confronting something”, McCreery says. “I don’t want to particularly write or read about people who have got everything solved.”

Most of these stories are in prose, while others fable-like and quirky. All are short; shorter than a short story. But they immediately take you to a time and space, and linger in your mind long after you have turned the page. So much has gone into each story. Every single word chosen with precision. Each story title cleverly enriching the layered meanings held within. “There is a lot of crafting involved”, McCreery says.

That in itself is the challenge and feat of writing microfiction. With space being limited, the “music of language” as McCreery puts it, and the use of implication is a must. The reader holds the ultimate power to decide how they think each story will eventually end. “The reader is pretty clever”, states McCreery. “You don’t have time to set up a scene [or] describe the characters. You pretty much have to plunge in. Then let the reader figure out what happens next.” In the micro story ‘Missing’, it is up to the reader to decide if and when little Amy will come out of the cave in which she has hidden to avoid her family on a bush walk. It is the reader who is a witness to Alan in ‘Loose Ends’ after having lost his job to offshore outsourcing while grieving for his wife. What will he do? Where will he go?

With her ever-busy schedule, McCreery did not set out with a clear intention of writing a book when she started writing microfiction. Her focus was continuing to write. After seeing a friend post a drawing a day on Facebook, McCreery decided to do the same for her writing, setting a New Year’s Resolution in 2015. However, despite approaching her writing challenge with the same fervour as ocean swimming, there were days she struggled to find inspiration. “It starts of [as] fun, but half way through the year you start scrambling for ideas.” Her micro story ‘Account’ arose from one such instance – a story written with a staccato rhythm encapsulating the mind-split created by life’s demands. “I thought, ‘I just gotta write something’ … so I got out my laptop and transcribe[d] the news”, she says. Later building on a suggestion from her writer’s group, McCreery positioned the story from a busy mother’s perspective and layered the news feed with that of preparing dinner for the family. The result is clever and highly relatable.

The government needs to do more. Life jackets should be just like seatbelts. Peel spuds. The third inquest. An earlier breakdown. Both lanes stretching from the M4. An extra 60- to 90-minute travel time. Boil water. Know the dangers. Drivers battle fatigue and race to meet deadlines. Finger of blame aimed squarely at the big supermarket chains. Gorilla on. Faulty indicators. Unsecured loads. A senate inquiry. Rogue drivers. The top of the chain to be held accountable. Plastic chops. Big retailers named and shamed. Coles, IGA, Metcash, Coca-Cola. Keep a close eye on the weather. Really chilly this morning. Yell kids. Almost tropical compared to other temperatures around the state. What about minus 2.5 at Tuggeranong. Bowl Pal. Not a cloud in the sky. Nothing to keep the heat trapped. Big full moon. Good night for the snow resorts. Ten centimetres of the white stuff. 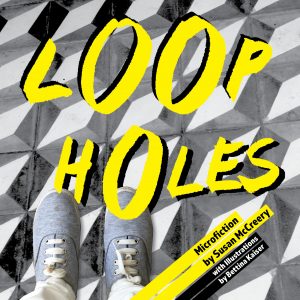 Loopholes will be available from 1 December through your local bookstore, and online book sellers via Booktopia. Pre-release copies of Loopholes are available now at a special discount and free postage.

Susan McCreery’s microfiction has been published by Spineless Wonders (Writing To The Edge, Flashing The Square, Out of Place), as well as by Seizure and Cuttlefish. Her poetry and short fiction have appeared in Best Australian Poems 2009, Sleepers Almanac, Going Down Swinging, Hecate, Five Bells, Island, Award Winning Australian Writing, Lost Boy, Escape, The Trouble with Flying and Shibboleth, among others. Story competition shortlistings include the Overland/Victoria University, the Hal Porter, The Age, the Margaret River and the Albury City; prizes include the joanne burns/Flashing the Square, the Carmel Bird, the Bundaberg Writers, the Peter Cowan Writers, and the Julie Lewis. Her poetry collection, Waiting for the Southerly, was commended in the Anne Elder award (2012). In 2014 she was awarded a Varuna fellowship and an Australia Society of Authors mentorship for her short story collection.