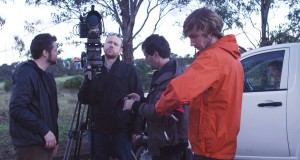 1. Which of your stories is being made into a short film? How did this come about? Did you pitch the story or were you approached?

The story is called Gecko. This story and another one I wrote called Robber appeared in the 2008 UTS Writers Anthology, where they were seen by a filmmaker Reuben Field. He had just won the Optus/MTV One80Project competition and was preparing to make his film Dungoona. He felt that Robber had a similar vibe, and proposed to make it as a warm-up for the cast and crew of his next film Dungoona.

Unfortunately, MTV did not let him spend their money on another film, so Robber didn’t happen. A few years went by. In February this year, Reuben contacted me and suggested we submit Gecko to Metroscreen’s Raw Nerve funding initiative, as it fit this year’s theme of “second chance.”

Reuben Field, producer Sarah Steel and I made a video pitch and submitted it. Gecko didn’t get into Raw Nerve. Reuben and Sarah suggested we enter it in Screen NSW’s Emerging Filmmakers Fund. We needed a finished script, we spent a month developing the script together and submitted it. Once again, we were rejected. Undaunted, Reuben and Sarah set up a Pozible campaign to raise $3000, lined up an amazing cast including Tiriel Mora and Georgia Adamson, scouted locations, assembled a tremendous crew, and shot the film in late August and early September this year. Gecko is currently in post-production.

Reuben also shot Robber while working on Gecko! So I have two stories being made into films.

I wrote the first draft. Reuben, Sarah and I worked together through subsequent drafts. After that I just turned up on set and watched my stories come to life, which I can attest is a pretty amazing feeling.

Gecko ends with a short section of free indirect discourse. In order to translate that to screen, I gave the main character a teenage daughter and added a final scene where it is months later and she asks him a question that prompts him to explain how things turned out. Otherwise the film is pretty faithful to the story. 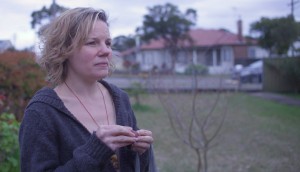 I think Reuben and Sarah liked the fact that it’s a romance between middle-aged characters, which you don’t often see on screen. Reuben also liked the ending. The way it leads the reader to expect a sort of fairy tale happily-ever-after conclusion but then doesn’t, due to innate human lameness. Just like in real life.

5. When will the public be able to see the short film and where? Will it be possible to see it online, will there be a special screening arranged as an event?

There will be a screening for cast and crew and supporters of the Pozible campaign. The plan is to submit it to film festivals, starting with the Sydney Film Festival. It will eventually be online, but only after it’s had its run at the festival circuit. This is due to many festivals only accepting films which haven’t been shown elsewhere, including online.

6. What are you working on next?

I’m working on a collection of short stories that are due in at Spineless Wonders next month.

7. Do you write a number of projects at a time or focus on one project?

A bit of both; I have a few large projects that I’ve been working on sporadically for years, but my regular writing tends to be on short pieces which finish more or less before moving on to the next one.

8. I heard Neil Gaiman in an interview mention, when he was looking after his first baby, he would write from four am while his wife slept. Please describe your writing process. Do you have a unique writing routine? Do you take frequent breaks or write for prolonged periods of time?

I wish I could say that I had a regular writing routine, but I don’t. I just peck away at stuff whenever I get the time and am in the zone. I do believe that it’s important to write regularly, though, and I aspire to that. It helps to have deadlines. In my writers’ group, The Beak, we assign ourselves writing exercises for each meeting to force us to write something. And lately I have started scheduling blocks of writing time in my Google calendar, which has been working rather well.

9. There are more books available in bookshops written by men than women. Hence, the existence of the Stella Prize in Australia and what used to be till last year in England, the Orange prize. It is now called the Bailey’s Prize. Do you think there is a difference in what men and women write about or their writing styles that contribute to this or it is something else entirely?

With so much variety out there, I don’t really discern all that much of a difference in style or content between male and female writers. Even if there is any, I think most readers of literature are looking beyond the gender of the author when they’re selecting books to read. I’d put it down to the fact that publishing has long been quite male-dominated (along with Hollywood, banking, aviation, neurosurgery, politics, haberdashery, and almost everything else).

I think publishing has come a long way since the days of Hemingway and Updike—certainly farther than Hollywood et al. I could name a few well-known female writers from the 19th century, I couldn’t name a single female painter or composer from that time—there were, plenty of both; I just mean that none were famous enough that I can name them today. Maybe publishing has always been at least a bit more progressive among the arts.

There are a lot of female writers known for short stories ,to name a few: Jhumpa Lahiri, ZZ Packer, Grace Paley, Zadie Smith, Flannery O’Connor, and Alice Munro. I wonder if that has anything to do with some old idea that the novel was the more manly form, so women have been more successful in getting short stories published.

10. Do you have any advice for people hoping to get published? Do you think doing Creative Writing courses at university level and short courses at state writers’ centre would be helpful?

I’ve had six things published—three in two UTS Writers Anthologies and three in two Spineless Wonders anthologies—so I’m not an authority on the subject. You can’t get published if no one ever sees your work, so obviously submitting to journals and entering competitions is a big part of it. A lot of writers start blogs to get their work out into the world and build up a following. My favourite writing blog is Jen Craig’s Absurd Enticements: http://absurdenticements.blogspot.com.au/.

Being part of a writing community is extremely helpful as well, not only for the support and feedback you get but because everyone keeps each other in the loop about what publications are currently calling for submissions, what themes they’re looking for, what competitions are going on, and general word-of-mouth referrals. Most of my writing community comes from the creative writing course I did at UTS. I met some great people there and formed a writers’ group with friends from the very first class I took. That was nine years ago, and we still meet up every couple of months!

11. Are there any books or other resources on writing you found helpful?

Quack This Way, a conversation about writing between David Foster Wallace and Bryan Garner is excellent and Bird by Bird by Anne Lamott is useful.

I think knowing a bit about literary theory can be helpful. I was required to take a class in theory as part of my UTS writing course and though I went into it with dread and some resentment at being forced to take it, I came out of it quite enlightened. I’ve learned more since, not from specific books but from reading articles online, mostly as a result of my ongoing obsession with David Foster Wallace.

12. Are there any short films you enjoyed, which you would recommend people to see online? Do you think there is potential for growth in collaboration between short story writers and filmmakers in Australia?

I have a four-year-old daughter, so the only film I have seen recently is Frozen, about fifty times. As well as every single episode of Octonauts at least a couple of times each. I will state that my most favourite short films ever are Theory of Achievement and Ambition by Hal Hartley. That’s going back a couple of decades. I am unsure if these are available to see online.

It has become possible to produce a technically decent-looking short film for very little money and put it online where potentially a lot of people can see it, which means that many more short films are being made now than ever before. But for a film to work, you still need great actors, great performances, great cinematography, and great editing. Most importantly, you need a great story to start. I think there would be a lot of demand among filmmakers for short stories they can adapt to screen.

A native of Washington, D.C., Jon Steiner moved to Australia in 2000. He studied writing at the University of Technology, Sydney.  His work has been published in the 2007 and 2008 UTS Writers’ Anthologies and Spineless Wonders’ Escape anthology.

You can listen to the audio trailer of ‘Robber’ here: