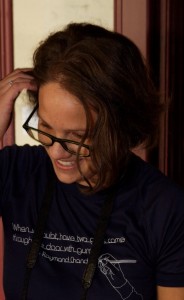 1.Who are the short fiction authors you admire (Australian or otherwise, alive or dead)?

Salinger is the biggest cliché but aside from authors I’ve published – too numerous to mention – he still stands out, as does Amy Witting, Dorothy Parker, Michael Chabon. Emmett Stinson’s Known Unknowns has been the most recent to make me stop breathing momentarily. I really dug it.These lists really are difficult, aren’t they. I’d have a different list tomorrow.

2.What is the most memorable short story you have read? And why does it stand out for you?

Again, aside from ones I’ve published and some of Salinger’s Nine Stories, Alistair Macleod’s ‘The Boat’ would be one of them (one of the many).

There’s that not having to explain thing that I love so much about short stories. They don’t go over the top and have to all match up neatly in the way that novels so often do, to feel well rounded. They are also short, which is good on a tight time budget.

I’d try to avoid describing my own writing, I guess. People seem to get their own writing wrong, don’t they? I don’t know – carrying on some kind of mundane realist tradition? Interested more in interiors and things not really happening than things actually happening. Interested in the way things don’t really change and sometimes, very occasionally, surprisingly, do.

Usually always the most recent story, which right now is one I’ve just finished called “It’s Been Going on For a While”. Why – probably because I haven’t spent as long loathing it, because it’s still fresh.

Ideas come from anywhere. Seeing someone do something, hearing an anecdote, looking through a window, imagining what would have happened if there had been a slight shift, something a tiny bit different, to the way things actually worked out. Mainly imagining what it would be like to be the person I’m looking at at the time.

I pretty much go it alone on my stories. I don’t know – I think of something and start mapping out an idea and then start writing it and when I get to the end, if I’m not physically revolted by it, I’ll re-read it and perhaps send it somewhere.

Yes and no. See the past seven years of my life for examples.

I feel excited. For people driving in their car to be able to hear a story – awesome! For those of us who read online all the time nowadays – I like knowing I’m there too.

Advice on starting a press, is that what you mean? I don’t know: if you’re not pissing people off, you’re probably not doing it right? That’s always good advice. Publish what you love. Or if you don’t love it, it should make you wildly rich so that you can publish millions of what you love. Know that if you like it, it has value. I don’t know – all advice is rubbish, isn’t it. Just do it, really.

Louise Swinn is a critic, writer and the editorial director of Sleepers, publishers of The Sleepers Almanac, and of award-winning fiction including Steven Amsterdam’s Things We Didn’t See Coming. Her most recent story ‘A Clean Kind of Dirt’ is in the current Kill Your Darlings.