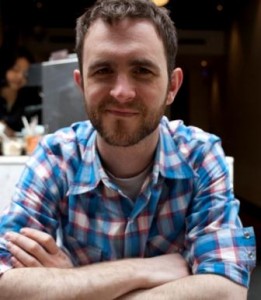 I tend find inspiration from different authors at different times, depending on what I’m writing. At the moment my book pile is stuffed with shorts by John Updike, Ray Bradbury, John Cheever, Shirley Jackson and Julio Cortazar. I’ve also read a lot of Robert Drewe recently, whom I greatly admire as an Australian short fiction writer.

Probably the most influential is a story called Desert Notes by Barry Lopez. It’s one of those stories that (I think) gets behind the meaning of things, and gives it a little shove towards the reader. Loosely it goes something like this: a man observes a truck moving across an empty desert plain. He experiences the drive from each seat in the car. He steps out and walks beside it. He gets back in, listens to the engine, the tyres, the dirt beneath the tyres. He climbs out and waits as the truck recedes driverless toward the horizon.

Lopez uncovers something extraordinary in the ordinary, and the story convinced me of the power of short form.

Definitely the immediacy of the experience. Reading short fiction is like watching a polaroid develop. Not all aspects of life need or want to be explored in over 200+ pages (or 100 pages for that matter), and many novels I read really feel like short stories with packing foam.

I hope I’m working towards a style, but everything at this point feels quite loosely tethered. If I was to boil down my stories they would be probably be distinguished by a strong use of premise. I always start with a unique premise, a situation or circumstance, into which I pour my characters.

I heard recently that style is often the product of an author side-stepping his or her inadequacies and leveraging their strengths. I’m definitely still discovering what my strengths are, whilst learning at the same time to avoid my weaknesses.

I’ve got a story nearing its final draft that genuinely surprised me with where it ended up. This is the part of writing I enjoy the most. As writers, we take leaps of faith everyday. You start writing into a kind of abyss, the plank forming centimetres in front of your next step, not knowing how deep or wide the crevasse might be. But it’s exciting at the same time. You can’t always see to the other side, so it’s always a surprise to get there and peep around.

I keep a regular diary while I write and can see in it places where I’ve been trying to figure out where this particular story should go. The direction and tone completely changed as I wrote forward.

Writing is one of the few places where my mind, my thoughts, my imagination, still surprises me.

Every now and then I see an aspect of something I’ve read, heard or seen, formed as a kind of five second movie trailer in my head. Then I go and explore that trailer in a notebook until I’m convinced it’s a story. For example, a recent story came after travelling by air over a period of months, and the experience of living the transit life. I carried that thought around, which represented a kind of need to better understand the experience, and then I saw the Sydney dust storms. Suddenly I knew what I needed to write, and I began to bring the two ideas together, linked by that visual cue.

I’m convinced that my ideas form in some kind of creative primordial soup. I think writers should focus more on ensuring the soup is kept on the boil, than what exactly comes out of it (or how often).

I’m an enthusiastic drafter. I’ll usually write the first draft by hand as it feels less formal than typing it on a computer. My first draft is usually awful. My second and third drafts are equally awful.

Instead of revising or editing during these drafts, I’ll usually start a fresh document for each and re-write them in full. It’s really hard to direct a story where it needs to go if you are squeezed between your existing sentences. Also the crap that comes out in my first drafts is never worth saving. If a line happens to be brilliant, it should stick in my head. I’ll remember it, I shouldn’t need to see it on each draft.

I’m really just exploring in these drafts, and that is rarely a pleasurable experience. But with each successive draft I start to discover the story, and things start to get interesting. Once I’ve got to the 3rd or 4th draft, I’ll usually feel I have a handle on the story, but need an external opinion to get at its core.

I’ve been working with a mentor and I’ll send it off to him and meet the following week. Some of his feedback is line by line, most though are thoughts and suggestions, lines of enquiry, sometimes a list of stories that I should read. This external part is essential in providing perspective. It’s also a nice forced break. I know once it’s out of my hands for review I can focus on other things until we meet up. At the same time I’ll also send it out to a few of my trusted readers, who help provide perspective on how a story might be received by a wider audience.

After I get the comments back I’ll run it through around two more drafts, send it back to the mentor for a final look and then start thinking about submitting. I have a list of places that I regularly check for themes and submission deadlines. A big part of submitting is about having the right story at the right time, and rejection usually takes at least three months. So it pays for me to think further out than just where my current story might go, and often I’ll wait for the right submission opportunity.

In a financial sense, I’m not sure. Creatively, short story collections are being published more frequently in these last few years. Writers such as Cate Kennedy, Nam Lee, Stephen Amsterdam have all had collections/stories which have been well received critically. But if I ask many of my friends, who aren’t writers but are avid readers, when the last time they read short fiction was, they would say high school.

I think there’s an assumption being made that it’s easy to make the transition as a reader from long fiction to short fiction.  And for those who have completed creative writing degrees, the transition probably is easy. But many people have never been exposed to short fiction before, hence encountering it, even in a familiar space, remains a little uncomfortable.

So while I think short fiction has the potential to be incredibly relevant at a time where brevity is all the rage, the distribution method holds it back.

Short fiction doesn’t belong in the novel format. Few of my friends would buy a book of short fiction, in the same way they wouldn’t buy a book of short form journalism.  The behaviour of reading novels, ie sitting down, ploughing from beginning to end, isn’t always applicable for reading short fiction. There are many endings in a short fiction collection, and many beginnings. You don’t need to read one after the other, or for that matter, in order. Yet because of packaging requirements (ie you need a spine to be on a bookshelf) we treat short fiction like chapters in a book.

I don’t believe that mainstream relevance for short fiction is going to come from within bounds of a book, or the journal. People generally freak out when they find the unfamiliar in a familiar space, it’s what horror movies play on. In the same way, to an unfamiliar reader, the inclusion of short fiction in a book format has the potential to position its defining characteristic and strength (ie brevity) as a weakness. That and it’s totally confusing.

The product is sound, I just think the packaging just needs work.

The more places, the more formats, the better. It makes absolute sense that short fiction should have its own system of distribution, and digital seems like one of the few mediums offering up innovation in this space.

The best thing about writing short fiction is that you can fail often and you can fail cheaply. In business, this method of experimentation is a prerequisite for innovation. So I would say get comfortable in whatever format you write in, but give yourself opportunities to fail every now and then.

Mark Welker was 2009 Griffith Review Emerging Writer of the Year. He blogs at http://www.markwelker.com where you can read his stories and musings.