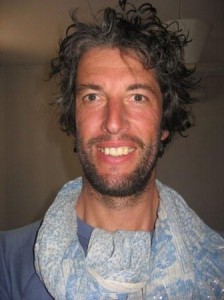 Jennifer Mills – her own zines (www.jenjen.com.au); look out for a collection later this year or next

Michael Ondaatje – The collected works of Billy the Kid

Cyril Wong – Let me tell you something about that night

I read Meanjin and Island to keep abreast of contemporary Australian short fiction.

2. What is the most memorable short story you have read? Why does it stand out for you?

‘The Circular Ruins’ by Borges (published in his Fictions). The opening is sublime, yet it is not until the final sentences that you realise what the opening, and the title, really mean. Repeated readings bring new insights.

The immediacy. At their best they are gut-grabbing exposes from another world.

I put myself in the Borges camp (as he outlined in the foreword to The Garden of Forking Paths: ‘It is a laborious madness and an impoverishing one, the madness of composing vast books – setting out in five hundred pages an idea that can be perfectly related orally in five minutes … A more reasonable, more inept, and more lazy man, I have chosen to write notes on imaginary books.’

Decidedly unprolific. Often the stories have a consciously unconscious underlying Buddhist theme, either of being stuck in the never-ending repetitive cycle of samsara, of suffering, or escaping the trap.

‘The uncoupling of Eduardo Martinez’ in the collection Bruno’s Song and other stories from the Northern Territory (NTWC 2011) is an escape story, hidden behind the veneer of Eduardo Martinez, the same-named first-born son of the same-named first-born son, of the … who is, who all have been, the signalman at the local railyard.’ When his father Eduardo suddenly dies, young Eduardo is set to take his place.

‘Just like the Phantom,’ his father used to joke. ‘Same name, same job, but a different person behind the mask.’

The ones I am currently composing (mostly in my mind): one, a blind translator visits a remote outback town with a strange, un-nameable curse; another, a story of addiction told in the round, with no beginning or ending, the reader chooses where to start observing and where to break off.

I will always have a fond place for ‘Elijah Upjohn, public hangman’ (although ‘fond’ is probably not the right term for a story that chills me every time I read it) and ‘Encounter at Kalayakapi, circa 1880’ (which Sophie Cunningham asked to publish in Meanjin).

If I knew I would drink from that soak more often.

‘West from Failure Creek’, a story recently completed, is an exploration of ego and vainglory, told from the perspective of Captain Sturt at the threshold of failure in his quest to discover and sail upon the inland sea. It grew from a joke about the proposed web domain name for my solo walk across the Simpson Desert in 2008: Sturt’s Hell, or sturtshell, which reads more like ‘sturt shell’. The shell became the metaphor for his grandiose ego. The rest springs from the well of my own adventures, and the vicarious reading of Sturt and others who dared to confront the fearsome interior.

7. What is your writing process – from idea to publication? (Alone or involve others)

The idea and first draft of what has become ‘Elijah Upjon, public hangman’ was written in 2000; ten years later it won the Trudy Graham Biennial Literary Award (Prose). I am not a flowing writer, allowing any words to come out so that a first rough draft emerges. I edit – I know I should not – as I write. The writing for me is very visual. Often I write notes for scenes, so a story is sketched in pencil; layers and textures are slowly added over time.

I do request, on occasion, feedback from others, but generally I allow large chunks of downtime between drafts. In this way stories evolve slowly, often taking years. They are essentially complete when published, although I cannot resist the red pen when I re-read them.

Hmm. Not financially. $300 for 2000 words in Meanjin. Arnold Zable shook his head when I told him that. How can you survive? 80 cents-a-word in The Age, $1 for The Monthly. I make less than pocket money. It is a sickness … a love job.

Artistically, it seems to be making a comeback thanks to daring publishers (such as Sleepers), excellent writing (Nam Le, Steven Amsterdam), and the critical and public praise for Le’s The Boat. Because of the brevity of the short story, it is a form of writing that should appeal to the now-generation. Maybe as texts, or tweets.

I like the idea of bringing life to words with audio. With the right readers and character interpretation it can be transcending.

The printed book will never die – just look at the comeback vinyl has made – but the demand for digital content will grow. Especially if you can underline passages and write notes in pencil in the margins and procure second-hand digital copies with the ephemera of previous readers.

Avoid the green crystals in the garden. Don’t feel that you are a lesser evolved being because you don’t have (or need) a backbone.

Break a leg. Or somebody else’s (since you have not).

Michael Giacometti is an award-winning writer and adventurer based in Alice Springs. His poetry, fictions and essays have been published in Meanjin, Island, Wild, Fishtails in the dust: writing from the Centre (Ptilotus Press, 2009), How to look after your poet in the event of a cyclone (NTWC, 2009), Adrift: poems inspired by the raft journey of artist Ian Fairweather (NTWC, 2010) and Bruno’s Song and other stories from the Northern Territory (NTWC 2011).

This year, he is the recipient of an NT Writers Fiction Mentorship to work with Melanie Ostell on his manuscript, ‘This Landscape of Failure.’

He is currently an Australian Poetry resident Café Poet at Café Gonzo in Alice Springs.