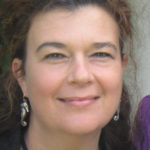 This week we talk to Karen Manton about her piece ‘Shot Tower’ which appears in Landmarks, the latest anthology curated by Spineless Wonders. During this interview Karen describes an Australian landmark of personal significance to her, who inspires her writing and what inspired her micro-lit piece.

The Thunder Cave, along the Great Ocean Road near Port Campbell. Unfortunately you can’t get close down the steps as you used to, where the waves come in along a channel and disappear into a dark cave to pound against the hidden rock. I love the wildness of this place, it defies humans and is ancient and ever-changing.

What inspired you to write ‘Shot Tower’?

The Shot Tower is in one of my earliest memories. For years, on and off, I’ve passed it and often found myself wondering on it, there is something both eerie and comforting in its presence. I’m interested in those kind of spaces — that have a purpose which comes to an end, but the space remains, and has a life of its own. I always wanted to go inside and have a look around.

I write in a demountable in our back yard, hidden among the jungle of tropical plants and the sounds of birds and insects. Or I write at a little old wooden desk in the house, which is overrun with books and papers and paraphernalia. Or sometimes at a table in the garden, in the company of cicadas and raucous cockatoos and perhaps a green tree frog. Or in my mind, on a walk, swimming, or awake at night.