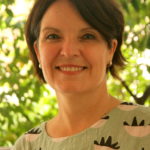 This week we talk to Sydney poet and prose writer, Marjorie Lewis-Jones regarding her short story ‘The Shape You Make’. This story appears in Landmarks, the latest anthology curated by Spineless Wonders. During this interview we discover Marjorie’s favourite Australian landscape, who inspires her writing and what inspired her mirco-lit, ‘The Shape You Make.’

We scattered my mother’s ashes under a tree I can see from my front veranda. It’s a modest tree in a suburban park surrounded by some ancient and very broody fig trees. These trees are significant landmarks for me. So too were the beautiful old fig trees on Anzac Parade and Alison Road so brutally cut down by the New South Wales State Government in the last year to make way for some dubious transport. It’s shocking to me that they’ve been cutting down our trees and that more are earmarked to go. Along with many other Sydneysiders, I’m grieving.

What inspired you to write ‘The Shape You Make’?

Inspiration for this story was nebulous to say the least. Looking back, I see my writer’s mind as sand on the ocean floor with a stingray moving above it. The stingray’s motion clouds the water for a while so it’s impossible to see the seabed. The murk clears and the sand becomes visible again – although it’s fleeting and still shifting. The story was born from this odd liminal state: half seeing, half knowing, half not …

Anything that helps me put pen to paper is good. Having said that, one danger of writing to a theme is getting stuck in a rut or being predictable. To avoid this I often constellate my ideas and images around the theme I’m working with – scribbling them onto a page in my journal like a mud map. I’ll ignore this mud map for a few days or even weeks – giving the scribbles time to sink into my subconscious. Then I try to catch the wave as it resurfaces. Sometimes it works and I surf to the shore without toppling.

I write in a loft in a beautiful old terrace in Balmain. There’s a fabulous coffee shop on the ground floor and a close friend works on the floor between me and the coffee – so she’ll often join me for a cuppa. Another dear friend joins me in the loft on Fridays. No question: It’s heaven.

Lately I’ve been lapping up the stories of Carys Davies (The Redemption of Galen Pike), Lucia Berlin (The Manual for Cleaning Women) and Josephine Rowe (‘Glisk’—winner of the ABR Elizabeth Jolley Short Story Prize 2016). I’ve also been enjoying the work of scores of poets and a brace of Aussie children’s writers, including Judith Rossell, whose Withering-by-Sea is fantastic. You can read about most of these writers on my literary blog www.abiggerbrighterworld.com. Here’s the start of a new favourite poem to give you a taster of what I’ve been encountering (it’s from ‘Great As You Are’ by Susan Griffin): ‘Be like a bear in the forest of yourself. / Even sleeping you are powerful in your breath.’ Davies, Berlin. Rowe, Rossell, Griffin,  … Economy, depth, hilarity, beauty. Oh, to write so startlingly and hauntingly. YES.

Marjorie Lewis-Jones is a Sydney writer whose poetry and prose has been published by Spineless Wonders, ABC Radio National, Picaro Press, Poetry Australia, Cordite, Hunter Writers Centre, UTS, THRESHOLDS international short story forum, Best Australian Writing 2015, the ACU Prize for Poetry 2016, and in other anthologies. In 2014, she won the Carmel Bird Award and the Lane Cove Literary Award and her poetry has won awards in Australian competitions. She is the Acting Managing Editor of the South Sydney Herald and runs the literary blog, www.abiggerbrighterworld.