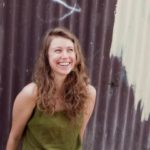 One of my favourite places in Sydney is the intersection between Cleveland and Regent St. It’s on the top of a hill. It’s usually busy, with two or three lanes of traffic moving in every direction, and cars usually drive through fast. In one direction you can see the city high rise, in another the train lines heading to the west and the south, one side moves into Surry Hills, and in the other direction you can see Sydney Uni. The sky feels huge, but at the same time the world feels close, and usually noisy. It’s quite an ugly spot. It marks whether I’m going to be on time for the morning bus (if it’s later than 8.30 when I walk through, I’m probably going to miss it), and it marks that it’s real late at night if you dare risk crossing without waiting for the lights. From the perspective of someone walking through, it marks a point of stillness while the world is rushed (you always have to wait at the lights for a little while at least).

What inspired you to write ‘The City Was Growing Inside Her’?

I was thinking about how teeth can really dominate a person’s appearance, and therefore their interaction with the world, and it escalated from there.

Oh I like it. The perceived limitations of a theme make it easier to think expansively.

I don’t have any one place I write in. I optimistically say everywhere is my writing space, but realistically say I get most writing done in libraries, as well as in the bus, at the beach, in parks, in bed…

So many! In short forms and prose poetry I’m reading a lot of Lydia Davis, Bernadette Mayer and Rosemarie Waldrop. I have recently come back to Inger Christensen’s weird book len.

Harriet McInerney is a Sydney-based writer who works in book publishing. She is interested in the blurring of the real/ unreal, and has been published in places like Mascara, Cordite and Voiceworks.