You probably didn’t know that you can vacuum your lungs. Well, actors can. Along with lip fluttering, spine rolling and repeating ‘BDGD’ and ‘PTKT’ at an amazing rate of knots without slurring or stumbling. These, and many other vocal tricks and tips were imparted by Holly Myers in the voice and microphone workshop she ran for Little Fictions’ actors earlier this month. Holly, a designated Linklater vocal practitioner, actor and voice artist has recently made the move from Adelaide to Sydney. A seasoned performer with Spineless Wonders Presents…, the Adelaide-based forerunner of Little Fictions, and all-round nice gal, Holly is a very welcome addition to the team.

We welcome Nicholas Starte, Oscar Morphew and Patrick Zoerner to the team and look forward to seeing them on stage very soon. 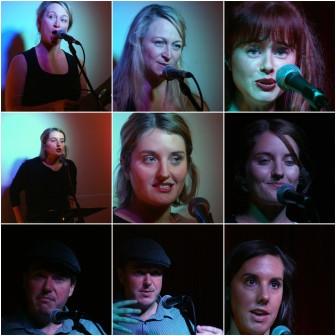 Also new to the stage this month was guest MC, Hayley Scrivenor. A well-read and witty raconteur, Hayley is a peripatetic writer, student and stationary seafarer. Here’s how describes herself: Hayley currently lives on an old sailing boat and sometimes in other people’s houses looking after their dogs. Only when they ask her to, of course. She spends her time thinking about the first person plural in literature (for which she miraculously receives money from the Australian government) and combatting seasickness (for which she has found singing loudly and off-key to be a cure-all). You can find some of her stories in Seizure, SCUM, Phantasmagoria, SWAMP, prowlings and Verity La. We are thrilled to have Hayley back on stage on July 11 to introduce stories and generally entertain us before she jets off to America for several weeks.

In 2016, we introduced a fun bit of audience participation – along with the ever-popular door prizes of the cocktail wheel and Quills’ Hoist. Each month we pose a question related to the show’s theme. The best written responses are read out at the end of the show and the winning entry wins two free tickets to Little Fictions. So far, we have asked about unusual pet names (for ‘It’s A Jungle Out There’), favourite feminists (for ‘Vaginal Spray’), best hacks (for ‘Life Lessons’), renaming suburbs (for ‘Sydney Stories’) and for the recent theme of ‘Addictive Text’ we asked about people’s obsessions. It turns out that our audience is addicted to anything from podcasts to TV series, from nose-picking to procrastination and from dressing up to re-dressing boring lecturers. The things you learn…

Another 2016 innovation has been the inclusion of brand new stories which have been submitted via our Little Fictions Call Out. Initially, the live readings which began in Adelaide and later moved to Sydney, were focussed on showcasing stories already published by Spineless Wonders. Late in 2015, we decided to put out a call to writers across Australia to submit new writing which would be suitable for performance onstage. The response was terrific and texts from that initial call out have already been introduced to this year’s line-up. In the latest show, held on June 20, four of the ten pieces performed were drawn from December 2015 Call Out, along with a newly-commissioned piece, ‘Invisible Writing’ by Jen Craig.

Judging of the May 1 Call Out is currently underway and the selected authors will shortly be announced.

Meanwhile, submissions are currently being sought in the Writing Down Parramatta Road Call Out.  We are looking for writing set in the Parramatta Road corridor, taking in the Sydney suburbs of Leichhardt, Annandale, Petersham and Stanmore – writing that reflects the cultural life and gives a sense of place for these locales – past, present and even future. Your piece of writing (from 100 to 1000 words) can be prose in any genre, from microfiction, creative nonfiction to dramatic monologue or prose poem. Suitable pieces will be included in an upcoming Little Fictions event in which actors read stories to a live audience at Knox Street Bar, Chippendale. Entries close July 31.

Submit, or direct queries to, info@shortaustralianstories.com.au