Sydney publisher, Bronwyn Mehan introduced the discussion by outlining some of the many names by which this micro form of writing goes by as well as by explaining why Spineless Wonders has settled on the term ‘Microlit’.

‘The word count of the form can be as high as 1500,’ Mehan explained. ‘Although 1000 is the usual upper limit. And at the shorter end of the scale is the 140-character social media writing, sometimes known as Twitterature.’Names for this mini-form also vary, Mehan pointed out. ‘They include short short stories, pill-size or capsule stories, nanofiction, sudden or micro fiction and flash fiction. And flush fiction if you read them on the toilet.’

Whilst agreeing that writing in this form is undeniably short, Mehan disputed the idea that it was also ‘sweet’, asserting that ingenuity or wilyness were its more common hallmarks.’The clichéd or hackneyed type of flash fiction will have a ‘gotcha’ twist in the tail (tale),’ Mehan said, ‘ but the best short shorts have twists throughout – from the title, to careful word choice, puns, inventive metaphors. Some do have endings that bring you up short or leave you wondering. But, as in life, there are not many neat endings or closures in this form.’

Another myth that Mehan contested in her presentation was that the micro story is for those who are looking for a quick and easy read. ’Some regard this as a new form,’ she said, ‘ – one that is a product of the modern age where readers are time poor and where our love affair with the 24/7 info-stream on small screens leaves us with smaller attention spans. But the key to this form is really compression not word count. These writers convey much in a few well-chosen words.’

Also on the panel was Melbourne microfictionist and video artist, Richard Holt who drew a fascinating analogy between the act of reading microlit with that of viewing a painting such as Manet’s Le Déjeuner sur l’herbe (Luncheon on the Grass). ‘Both forms rely on information outside of the frame,’ Holt said. ‘And there is a direct engagement of the viewer/reader who must play an active (not passive) part in making sense of the artist’s work.’ 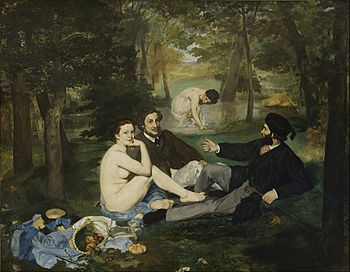 Newcastle writer and teacher, Joanna Atherfold Finn reported on the inaugural Newcastle Writers Festival Microlit Competition, explaining what the judging panel had looked for and outlining the various ways that the theme of ‘Thresholds’ had been interpreted by the entrants.

Videos based on the microlit texts from the four finalists – Amanda Berry’s, ‘Elbow Room’, Kelly Hawkins’ ‘Blue Light Disco’, Jodi Vial’s ‘Threshold’ and Karen Whitelaw’s ‘Koi’ – were screened at the end of the panel discussion. Karen Whitelaw won the $250 cash prize. A screenshot of the winning microlit is included below alongside the narration by Sydney actor Eleni Schumacher. 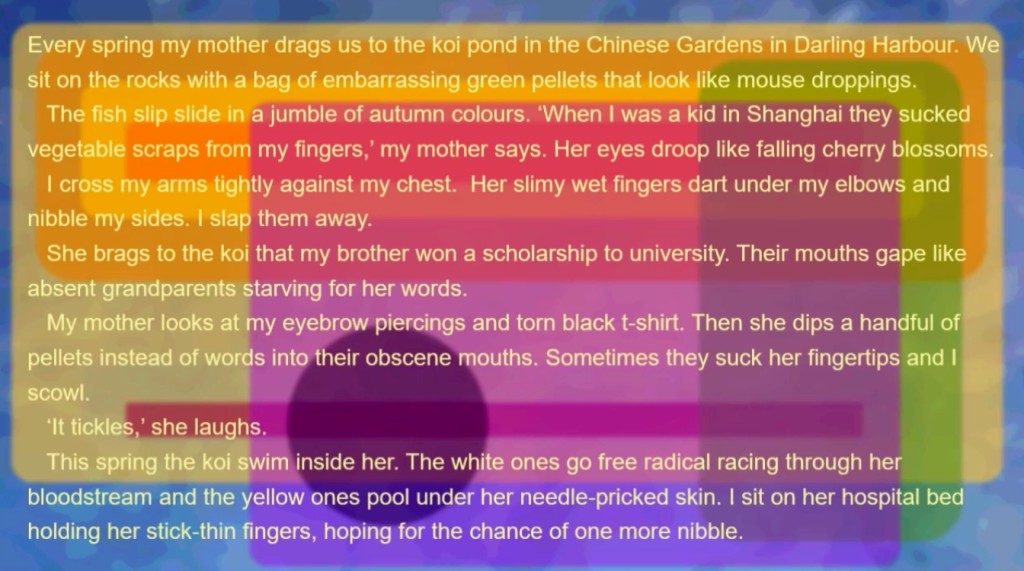