In this new series of interviews, we ask contributors about the origins of their micro-lit  piece anthologised in Out of Place, about who they read and about what gets them writing.

Mine is a single sentence beginning ‘As Letitia’s lithe limbs slid into the tepid, prawn-coloured waters of the Gulf of Mexico, Sebastian blew a lazy plume of lilac-tinted smoke into the air’. I think Sebastian is a distant cousin of Sebastian Flyte in Brideshead Revisited. I was practising purple prose in a single long sentence, and I also had in mind a photograph I’d taken of a cast-iron balcony here in Balmain near where I live, which echoes the look of a fern tree growing in the garden on that house. 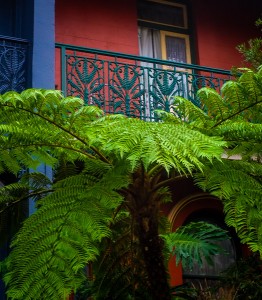 How do you know the point at which a piece you are writing should end?

Oh, I don’t, usually. This one followed the word count limit: 200 words, no more. So I filled that up and then stopped.

What you do if you haven’t written anything in a while and you want to get started writing again? Share one of your favourite writing ?exercises with our readers.

I love doing ‘terminals’, taking the end words of a poem and tossing out the other words, then writing the poem again, in your own words, but ending each line with the borrowed end words. I’ve used end words by Mathew Arnold, W.H.Auden, Diane di Prima, Kathleen Frazer, Barbara Guest, John Keats, Frank O’Hara, Banjo Paterson and James Schuyler. And others, including a very long poem by John Ashbery titled ‘Clepsydra’. 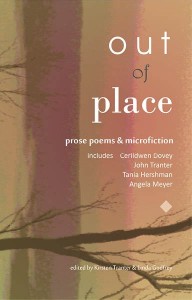 JOHN TRANTER has published over twenty collections of verse. His collection Urban Myths: 210 Poems won a number of major prizes. His latest book is Heart Starter (Puncher and Wattmann, Sydney, and BlazeVox, Buffalo, 2015). He is the founding editor of Jacket magazine and of JPR at poeticsrearch.com, and he has a journal at johntranter.net and a homepage at johntranter.com.