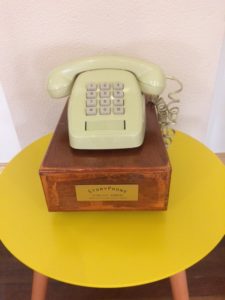 Slinkies team-member, Emma Howe, has been getting to know the six finalists and has produced a series of interviews so you can get to know them too. Today we are thrilled to introduce Ben Schofield.

What was your inspiration for ‘Lonely Phone’?

The inspiration came from the concept. Knowing that people would be picking up a handset to listen to the story rather than reading it, combined with the fact that no one does that anymore (uses payphones or traditional telephones).

Chuck Palahniuk, Irvine Welsh, Kurt Vonnegut. Generally, I like books that do interesting things with structure and deliver content that you can’t get in movies and TV.

After being at work you don’t exactly have a huge amount of time to write. So short fiction gives you a chance to complete something without it taking forever. Also, it’s easy for people to consume rather than some giant 500-page novel.

Did you write ‘Lonely Phone’ specifically as an audio piece or was it originally written for print?

It was always written with the audio concept in mind. Trying to engage people on different levels knowing they are picking up the phone to listen to the story. Holding the handset, hearing it close to their ear. Using those senses to try and make them laugh or creep them out a little.

When it comes to really short fiction, do you generally start wide and then cut it down or was ‘Lonely Phone’ always conceived as a small piece?

It was always a small piece. But generally with word limits I’ll go over a little and then just try to refine it back under 100 words or whatever the limit is. It helps you stick to what’s important and not waffle on.

The first story I wrote was a ghost story. I guess the character was naïve, trusting and grief stricken. The poor guy didn’t have a name. I’m not very good at naming characters. Sometimes I write in the 1st person just to avoid that. Otherwise they end up with stupid names like Joey Joe Joe Junior Shabadoo.