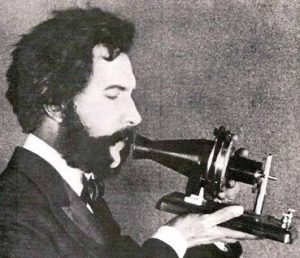 Slinkies team-member, Emma Howe, has been getting to know the six finalists and has produced a series of interviews so you can get to know them too. Today we are thrilled to introduce Ben Volchok.

What was your inspiration for ‘Oh, No! said Jarvis Cocker’?

Whimsy. Plus, my friend James wrote a short story about live umbrellas with a weird made-up word describing the way they moved and this is kind of a tribute to that.

Douglas Adams, Peter Carey… The delicate combination of absurdity and mundanity is something that appeals to me greatly.

You can get something out that’s wild and evocative and yet totally specific. It’s almost like it draws its power from how concentrated the writing has to be.

Did you write ‘Oh, No! said Jarvis Cocker’ specifically as an audio piece or was it originally written for print?

It was written for print, but picking a narration style for the audio recording was a creative adventure that I relished.

When it comes to really short fiction, do you generally start wide and then cut it down or was ‘Oh, No! said Jarvis Cocker’ always conceived as a small piece?

This piece was designed for a 100-word brief. I suppose with microfiction my approach is either to start writing until I have to stop, or find the most concise way of getting at a concept. This would probably fit in the former.

I’m going to cop out and say that I honestly can’t remember my first character but I do remember once writing a story about a carbuncle who was very ambitious but nervous. In a way that describes me perfectly.