In this post, Spineless Wonders’ Bridgette Sulicich and Dahlia Mikha quiz Katerina Cosgrove about her award-winning novella Zorba The Buddha – about the challenges of fictionalising real people and events and what initially drew her to the story of Bhagwan Shree Rajneesh and his followers. You will learn how Cosgrove goes about researching  and overcoming the ethical challenges of depicting controversial figures.

1.Your depictions of each character are so intricate and detailed, how were you able to get into the mindset and voice of each character, and feel as though you were authentically portraying real people?

I conducted interviews and enjoyed many informal chats over the year I was living in Byron Shire, with current and former sanyassins. I think that immersing myself in their personal stories, struggles and triumphs and letting their disparate world views seep into mine was an important part of the writing process. One particular character of mine, Mukunda, is a Greek shipping heiress, so I drew upon my own cultural and ethnic history for her character. As for Bhagwan/Osho’s character, I read absolutely everything he had written and listened to his teachings every morning while I was practicing yoga – and I still haven’t got to the end of them!

Gondwana is not a traditional ashram, it’s now an intentional eco-community – a place of serenity and beauty and vision. The people I met there were so open and generous that the story unfolded organically.

I don’t think I held back! I created a character in Bhagwan/Osho who embodied the Tantric notion of integrating light and dark. Osho was a villain to some and a saint to others. To me, he can be both. 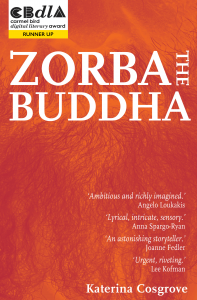 I don’t think a fiction writer’s purpose is to remain impartial, necessarily. My passion for the story came about as a consequence of my growing obsession with these key figures, in particular the characters Sharabo and Bhagwan/Osho – who can be seen in many different and contradictory guises, depending who you speak to.

I wanted to write about a short, intense vignette in Bhagwan/Osho’s life. His brief two-week exile in Crete came to me as the perfect device for a novella. I know the island intimately and I also know what sort of religious and cultural prejudices he was up against.

As discussed before, I researched steadily for over a year, and this research has since transformed into a personal, spiritual exploration of Bhagwan/Osho’s teachings. I have immersed myself in his writings, in books written about him, in documentaries and his voice recordings.

I have encountered many former sanyassins who feel exactly the same way Shakti did. I felt that as a storyteller I needed to give full voice to all the ambiguity, anger and confusion that an encounter with a ‘crazy wisdom’ master can generate.

Surprisingly, this novella was much easier to write than any of my previous works. It flowed quickly and subsequent re-drafts were focused and effective. I also had the help of a few trusted beta-readers who asked the tough questions to make it a better book. It helped that there was such powerful and engrossing raw material to work with. 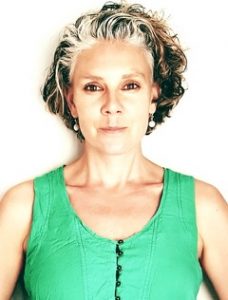 Katerina Cosgrove has co-owned café-bookshops (Sappho Books, Gertrude & Alice) and taught at the University of Technology, Sydney, where she gained her BA (Honours) and Doctorate in Creative Arts (Australian Postgraduate Award). She is the author of two novels, The Glass Heart (HarperCollins), Bone Ash Sky (Hardie Grant) and prize-winning short stories. Bone Ash Sky was a finalist for the Writing Australia Unpublished Manuscript Award.