We are very pleased to announce the following nine shortlisted finalists in this year's award. Justin Wolfers selected the finalists from a very strong field of submissions. The Carmel Bird Digital Literary Awards is for collections of short fiction and novella up to 30, 000 words. The winner and two runners up who will receive cash prizes totalling $5000 and publishing agreements with Spineless Wonders will be announced in September.

Mrs Lim was so small she could fit in Mrs Maniakis’ pocket, Mrs Maniakis said. Her eyes were black like cold hard beads and her eyebrows had been plucked and drawn on, so she looked like a movie star, she said. Mrs Lim was like one of those little China dolls you could get from China, where she was from, like a little souvenir, Mrs Maniakis said.
‘God, Mum,’ her son Peter said. ‘Can you even hear yourself?’
Mrs Maniakis was concerned that Peter might have misunderstood.
‘She was beautiful,’ she said. ‘Beautiful. Like a little agalmátio, a figurine.’
‘You’re being problematic, Yiayia,’ her granddaughter said. ‘You can’t say she looks like a China doll, not anymore.’
‘She doesn’t know she’s being problematic, poor thing,’ Peter said, and patted Mrs Maniakis’ hand.
‘I don’t have any problemata,’ Mrs Maniakis said. ‘I’m saying she’s was a coukla, like a little toy. You’re the one with problemata. The Devil’s going to get you.’

from The Free Box

Michalia Arathimos is a Greek writer. She has published work in The Lifted Brow, Westerly, Overland, Landfall and elsewhere, and is Overland’s fiction reviewer. Her novel, Aukati, was published by M?karo Press. She is the Writer in Residence at Randell Cottage and will hold the Grimshaw Sargeson Fellowship in 2021. 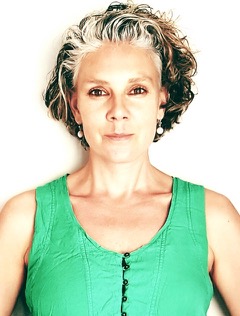 The late winter sun makes sleepy mudras behind my eyelids. My fingers and toes tingle, my spine unravels as I sit more deeply in the chair. I am content. In a state of bliss. One with the world: with this cracked and worn cow’s leather, slippery and hot under my thighs, the beauty and silence and terror of that beast’s dying, the smell of olive trees and pine resin and diesel fuel off the Aegean, this morning beam of sunlight which hits me right in the forehead, a third eye. This is not meditation. This is a dentist’s chair – and I am high on gas.

One  of  the  Australian  journalists  looks  down  at  my  manicured  toes.  Is  he  showing respect  or  merely  bored?  When  he  arrived  at  the  villa  and  caught  his  first  glimpse  of  me,  I heard him say to his compatriots in that squawking upside-down parrot voice, ‘Geez, he looks like God incarnate!’

from Zorba The Buddha

Katerina Cosgrove is the author of The Glass Heart, Bone Ash Sky and Intimate Distance, which won the Griffith Review Novella Prize. She has written for local and overseas publications such as Al-Jazeera, SBS Voices, Island, Daily Life, The Big Issue and has co-judged the Nib Award for Literature from 2014. 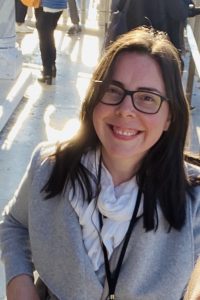 Faye watches the car loop the block three times before pulling up at the end of her driveway and idling there. She counts out thirty seconds and then steps outside, shutting the dogs in the house. The driver of the car kills the engine and emerges holding up a hand in peace. ‘Faye Hagan?’ he calls.
‘Don’t stand around shouting in the road,’ she says.
‘I’m sorry?’
She shakes her head and he walks up the long driveway. His footsteps crunch. He stops a few feet away. ‘Miss Hagan?’
‘What’s this about?’ she asks, eyeing his phone. He’s holding it out in front of him, the screen angled like a sun-catcher.
‘I’m Oliver Keate, a reporter with Siren Call Media. I’m –’
‘With who?’
‘Siren Call.’
‘Never heard of them.’
He steels himself. ‘I’m doing a podcast about the disappearance of Lorna McGuire.’
Faye’s sigh is a white wisp, gone in a moment. Twenty-four years is nothing, it turns out. Twenty-four years is a breath in the wind.

from Female(s and) Dogs

Brooke Dunnell is a Perth writer whose short fiction has been published in Best Australian Stories, Meanjin, Westerly and other journals and anthologies. Her work has been recognised in a range of competitions including the Neilma Sidney Short Story Prize 2017 and the Bridport Short Story Prize 2019. 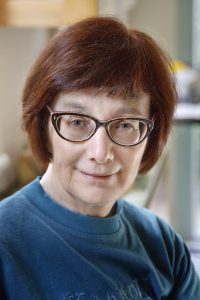 Paulette Gittins,
One Thing You Can't Get For Nothing

Tarragindi late at night. In the Ekibin Creek, frogs chanting. In the muggy quiet of the streets, fruit bats cheeping and flapping through the royal navy darkness. The night, vibrating with the huffs of a tawny frogmouth, the one-note (and flat) chirruping of crickets marshalled along the lawns, the laryngitic plaint of the brushtail possum. Houses clustering, dozing in the moist warmth. In James’ house, FM radio thrumming away in the background as he and Monica, working at their Law studies, synchronise yawns and eye-rubbing.

They believe they study better, more effectively, if they do it together. And since James’ wife Pam visits her mother on a Wednesday and Monica’s fiancee Alan is on duty at the hospital on the same night, why not meet and work as a team.

from One Thing You Can't Get For Nothing

A poet, novelist, short story writer, Paulette Gittins has been published in the Margaret River Press: ‘Fear of Flying’ and ‘Knitting, and in Award Winning Australian Writing. Her first novel, ‘The Secret World of Annette Robinson,’ (HarperCollins) won the NSW State Library Dobbie Award For A First Novel By A Woman Writer. 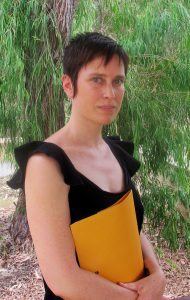 This story is about Norah and her thing. It’s not a flaw really, so much as a quirk. It started with her weight, which was about average. Norah got some of those scales that measure in 100-gram increments and she grew familiar with how her weight fluctuated over the course of a day. There was an optimal time to ‘weigh in’, about 8 am, to get the results she most wanted to see.

Norah began to notice that the numbers didn’t seem to match up. Like, the smaller numbers on the scale didn’t necessarily align with feeling big inside. She’d look at herself in the bathroom mirror and guess her number, but found it hard to get it right, even without the 100- gram increments. Was there some other way, some more accurate way of measuring herself, she wondered? 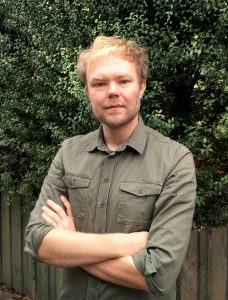 It was a long way to the bottom of the world. I had said my goodbyes at the University in a timely fashion, having taken the appropriate time to mourn and celebrate my six years in Germany, and left Frankfurt without ceremony and with only a little heartache. Thirty hours in transit was arduous, the food poor, the legroom insufficient. I was nervous and excited and I re-read your last paper en route, Sviberev, and remain impressed at your novel approaches to comparative metagenomics. At my connection in Kuala Lumpur I drank very e xpensive coffee.

The last leg of any long-haul flight is agony. I watched three French romantic comedies. Delirium set in. When the landing announcement came I pressed my face against the window, eager to behold my new home. It was too cloudy to see the landscape, and then it wasn’t. But I do not remember what it looked like. I remember only the rough kiss of the tarmac, the rush to the overhead luggage compartments, the face of the old man who stepped on my foot.

from The Tsars Football Club

Andrei Seleznev is a Russian-Australian writer based in Melbourne. He holds an MA in Creative Writing from the International Institute of Modern Letters at Victoria University of Wellington. His work has appeared in Overland, Turbine, Gargouille, and some other journals. When not writing, he works as a bioinformatician. 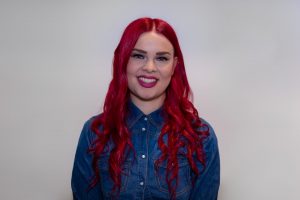 ‘Where are you going?’ this mouth asks.
These teeth press into this tongue, in case any more unwanted words come out.
Stephen says nothing. He presses a button, and the doors click.
There is a pause in Stephen’s heavy breath. For a few moments, his car becomes draped in silence. From the back seat, nothing of Stephen is visible but his thick hands on the steering wheel. The tang of his sweat smears the air.
‘Somewhere that body can be saved,’ Stephen says. He lifts his hand and cracks the bones in his fingers.

Carly Smith is a writer currently based in Perth. Her achievements include appearing on the longlist for the 2015 Scribe Nonfiction Prize for Young Writers, and having her piece Sea Blood shortlisted for the 2018 Feminartsy Memoir Prize. She recently founded Disbound Books, an independent press for sex workers. 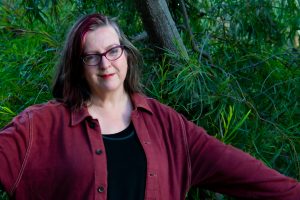 'The embroideries framed the entrance to my house. I put them there deliberately, right near the front door.

The connections between them were like webs built by different species of spiders, threads reaching out, making patterns, catching thoughts and memories with their different shapes. I could see in them the development of my skill. At last, the mastery of the bullion, and then, its overuse. Overgrown rosebuds choked that one.'

Sarah St Vincent Welch lives in Canberra and works as a writer, editor, writing teacher and image-maker. Her short story collection Shadow Work was supported by an Australia Council New Work Grant, and an ASA Mentorship with Sara Dowse. Her poetry chapbook Open was published by Rochford Press in 2019. 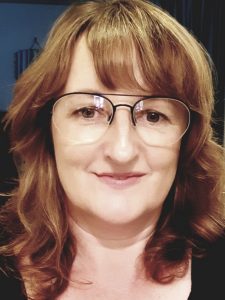 It was the job of one boy to climb the church tower each  midday and pull the rope in the sequence of the prayer.

He went through the forbidden door at the back of the church, behind the statue of the Virgin Mary holding Jesus, post-crucifixion. Mary was missing a finger.

Angella Whitton studied creative writing at the University of Sydney. Her first manuscript was chosen for a Varuna Publisher Introduction Program fellowship with Penguin Random House in 2019. Her stories have appeared in literary journals and the Australian Women’s Weekly. She likes tea, art, shrines, libraries and rivers.