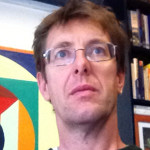 This week we talk to Richard Holt about his piece ‘Oblong’ which appears in Landmarks, the latest anthology curated by Spineless Wonders. During this interview, Richard describes a landmark of significance to him, talks about who inspires his writing and what inspired his micro-lit piece.

Richmond Station across from the MCG…generally considered an eyesore but I beg to differ.

What inspired you to write ‘Oblong’ ?

‘Oblong’ started as a word – the same word as in the story – scratched into the setting concrete of the footpath outside my workplace. 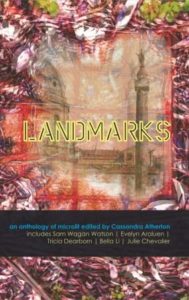 I usually do a brain dump over coffee then follow the sun around the house in the afternoon, polishing what I wrote in the morning.

Woody Guthrie…in many ways fiction writers are troubadours without the music.

Richard Holt is a visual artist and a writer of short stories and microfiction. His work has appeared in Etchings, Visible Ink, Victorian Writer and Australian Love Poems and been included in National Flash Fiction Day anthologies and previous Spineless Wonders collections. He was cofounder of Melbourne zine store, Sticky and produces microlit videos for outdoor screens under the banner ‘Flashing the Square’. His debut collection, What You Might Find, will be published in 2018 by Spineless Wonders. He blogs about microfiction at bigstorysmall.com.