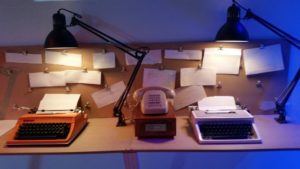 You enter The Pottery Shed via the rear lane and you are immediately drawn to the retro push button telephone. Pick up the receiver and listen. Push two or three of the buttons and hear micro-stories about landmarks – read to you by an actor. There’s an Australian woman dreaming of being in France and becoming Amelie. There’s a person overdosing in front of the dog on the tuckerbox at Gundagai. You are in the head of a fly-in, fly-out mine-worker.

You wander the perimeter of the room. Among the rows of student pottery you read stories of other landmarks on posters as tall as phone booths. A shot tower where lead bullets are made. A woman from upcountry tongue-tied by her new city life. A museum where butterflies sit alongside the stolen remains of Aboriginal people. 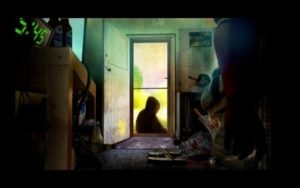 A flickering catches your eye and for minutes you stand, mesmerised by the colours and the sounds projected on the wall. A girl sits in an apple tree, high above her squabbling, dysfunctional family. A bridge where boys are chai-yacking. The Chinese Garden at Darling Harbour.

If you are lucky enough to be there for a performance, you’ll hear a story about death and the lesbian, about Marlon Brando’s lips, passion, possums and the Seacliff Bridge. You’ll see images from the nearby streets of Surry Hills and be transfixed as the magic of poetry brings each photograph to life, giving the familiar new meaning.

And then, it will be your turn.

All this time you’ve been thinking about your special landmarks. The beach holiday from your childhood, the abandoned water tower you pass on the way to work, the birth of your first child – a glowing baby girl. Your fingers itch to record the thoughts swirling in your head. To capture the larger idea that a physical landmark sets you thinking about.

You pick up the blank sheet of paper, thread it into the portable typewriter, and start tapping…

*from Jodi Vial’s ‘The Span’