When his dog goes missing, the young narrator in Tyler Mahoney’s ‘Headlights Like Satellites’ has no choice but to turn to Corey, one of the toughest and most connected kids on The Mission where they both live.

‘My stepfather—the rain-soaked scarecrow, bloated and soggy with buttons for eyes—doesn’t give a flying fuck about the dog. One less mouth is what he said, without looking up from the insurance infomercial on TV.’

A story which explores the cruel world of illegal dogfighting. Tyler Mahoney creates a world of gritty realism with language and imagery which is fresh, edgy and sublime. 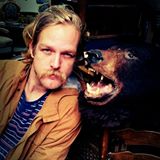 Tyler Mahoney is a graduate of Australian Film, Television & Radio School. He has just completed his undergraduate degree while moonlighting as a media demonstrator at The University of Sydney. He’s had film scripts accepted into international film festivals and debut at Mercedes Benz Fashion Week. He continues enjoying the momentum of his life, making music with his fellow Swamp Monsters and tending his vegetable patch.