Su-May Tan’s short story collection, Lake Malibu and other stories, has just been shortlisted for the 2022 University of Southern Queensland Steele Rudd Award for a Short Story Collection – no minor feat for a debut work! The collection’s stories traverse Malaysia (Su-May’s home country) and Australia (her adopted country) to examine the lives of very different characters all trying to find their places in a world that’s more globalised and fluid than ever before. In this interview, Su-May Tan chats about writing with her editor, Rachael Lewis-Lockhart.

Laurie Steed describes Su-May’s work as ‘subtle, though very little is simple or easy to define … mean[ing] every story in Lake Malibu and other stories echoes off the other in profound and sometimes surprising ways.’ As her editor, I interviewed Su-May (aka Amy) to explore how she achieves this, as well as find out what it means to be shortlisted for the Steele Rudd Award.

Rachael: What would you say are the overriding themes of Lake Malibu and other stories? Why did you choose them?

Su-May: The main themes in Lake Malibu are escapism, searching for happiness and a place to belong. Every character in this collection is trying to break free from something that is holding them back from being happy. A lot of their struggles stem from how society views them, or how they’re expected to behave. These stories explore whether they can overcome these prejudices and carve a place for themselves in the world. I chose these themes because I am interested in individuals who struggle against convention.

Rachael: Short story collections often have elements of interconnection and Lake Malibu and other stories is no exception. Talk us through how you connected these stories. 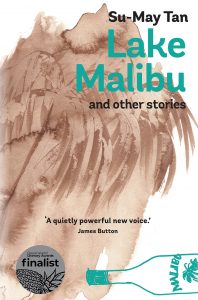 Su-May: Besides theme, the stories are linked by characters who appear in multiple stories. So, a child in one story may appear as a grown-up in another. A minor character may become the main character next. You might see similar houses and cafes and scenes, and soon you will hopefully feel like you know these towns and their residents as if you were one of them.

Rachael: The stories are set in Ipoh, Kuala Lumpur and Melbourne. Why these three cities? How do they shape the collection?

Su-May: I was born in Kuala Lumpur so that is the city I know best and Ipoh… Ipoh is just cool.  Melbourne is where I live now. I wrote these stories over many years so they kind of follow the journey of my life.

Rachael: The first story is set in Ipoh during the Second World War and the last in Melbourne in recent times. How did you order all the stories in between?

Su-May: The stories are arranged somewhat chronologically. And in so doing it illustrates the evolution of Malaysia over time from being a British colony to an emerging Asian country, to the global and complex nation it is today.

Rachael: Lake Malibu and other stories is such an evocative name. Where did it come from?

Su-May: I actually wanted to call it Lake Corona and other stories as the boys in the title story are inspired by a Corona Beer poster they see in a coffee shop. But because of the Coronavirus and its connotations, I was advised by my publisher to change it. I think the new title works as I wanted a name that evoked a sense of wonder and escape, this Western utopia of blue skies, fast cars and greener pastures.

Rachael: Tell us a bit more about you. When did you move to Australia from Malaysia? What was it like?

Su-May: I moved to Australia in 2012. It was a challenging time with a three-year-old and one-year-old in tow – looking for house, looking for work and navigating a new country without knowing anyone. But we got through it.

Su-May: Yes, I don’t think I’ve seen a lot of books by new migrants. Maybe when you’re new to the country you’re too busy trying to rebuild your life and make a living. Has it been hard? As someone who was raised and schooled in Malaysia, I do feel a sense of inadequacy when I see how much my daughter is learning in school here. A lot of the Creative Writing elements she did in Grade 5 English I only learned on my own much later in life.

Rachael: Tell us a bit more about your writing practice. When did you start writing? Do you write every day? How do you fit it in with everything else going on in life?

Su-May: I actually have a degree in Accounting, but I’m not very good at it. I picked up writing on my own as I always liked it. No, I don’t write every day. I fit it in around the day job and the three kids. Could be at night after they sleep or while waiting for them at an activity.

Rachael: Why was it important to get Lake Malibu and other stories published? What do you hope having it out there in the world will accomplish?

Su-May: It’s significant to me because it is my first published book. If it can touch at least one person, get them to feel something or connect to it, I will be happy.

Rachael: And last but not least, how does it feel to have your debut collection shortlisted for the University of Southern Queensland Steele Rudd Award for a Short Story Collection? What does it mean to you?

Su-May: I never thought a bunch of stories about some Malaysians would garner much attention in Australia. It feels great that these kinds of stories are being recognised, and it shows me how inclusive and diverse Australia is becoming.

Want to see what all the fuss is about? Grab your copy of Lake Malibu and other stories from your local bookshop or order it online today:

Rachael Lewis-Lockhart is a freelance editor, copywriter and graphic designer. She graduated from the University of Wollongong (UOW) as a Dean’s Scholar with Distinction, receiving a Bachelor of Arts (Creative Writing and Visual Communication Design). She went on to complete an Honours in Creative Arts (Creative Writing) at UOW. A member of the ES-Press team at Spineless Wonders, Rachael edited the Carmel Bird Digital Literary Award highly commended publication Lake Malibu and Other Stories.