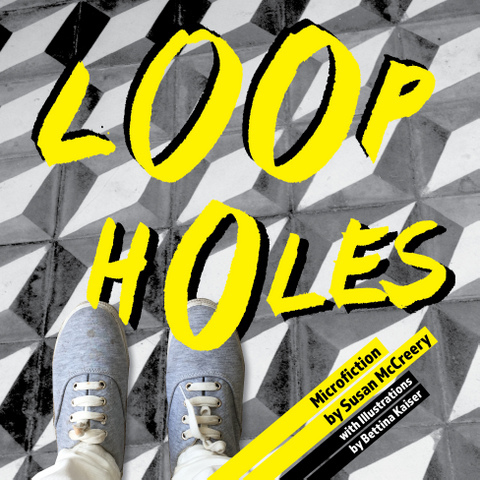 ‘This year’s shortlist highlights the diverse, risk-taking and creative work being published by independent publishers….’

We are thrilled that Susan McCreery’s Loopholes in the running for the Small Press Networks’ award for the most underrated book of 2017 sponsored by the Australian Booksellers Association. The winner will be announced by Toni Jordan, one of three MUBA judges, at The Wheeler Centre on November 17. Event details, here.

Huge congratulations to the very talented Susan McCreery, author of this unique collection of finely-crafted and inventive microfiction. Congrats too, to graphic artist, Bettina Kaiser who has designed and illustrated this beautiful, quirky publication.

To celebrate this announcement, we are offering discounts on the paperback and digital versions of Loopholes. For details, click here.

What the judges said about Loopholes:

In Susan McCreery’s Loopholes, microfiction is the ideal form to show poignant and sometimes challenging slices of life in silken prose. McCreedy’s tiny stories are about everyday people in their normal lives: a young couple’s relationship is strained when their car breaks down; a woman meets her boyfriend’s parents for the first time at a tense dinner; a woman considers her feelings about walking. The stories range from two smallish pages to a few perfectly chosen lines. They could almost be read as poems. In all cases, they linger beyond the turning of the page and it’s easy to imagine them as complete worlds; full-length novels concentrated down to their barest essence. McCreery can see beyond the surface of her characters to their very hearts.

Loopholes was released in December, 2016 and was launched by Carmel Bird at the Newcastle Writers Festival in April, 2017. Here is an excerpt from Carmel’s launch speech:

‘Think of a medieval fortress castle. Think of the narrow slits through which to fire arrows at the enemy. They are the loop holes. The archer is safe behind the loop hole while the keeping the enemy his sights. And a loop hole in the tax law offers you a way around the law, so you don’t actually break the law.

Life of course is full of loop holes. People get away with – well – murder actually, by slipping through a loop hole. And a constant in the graphic images that move throughout Susan’s book is the idea of the net – a collection of holes, woven or joined by wire or string through which people can sidle, or shoot their arrows. The images by Bettina Kaiser occur as lovely random surprises.

A micro story is a bit of a dart, a bit of an arrow, actually. So swift. So sure of what it’s doing. It has to be well sharpened, and well-aimed. Susan knows how to sharpen and how to aim for maximum effect, not only on the reader, but in a particular way, on the story itself

…. I think the word for all these stories is ‘build’. Each one builds its own fine narrative, and then each additional story becomes part of a structure – maybe like a painting, a long mural on a long wall – so that in the end the reader knows an incredible number of things about a great many people and situations. I realised after a while that the stories work a little in the way that cartoons work. And the reader ends up with revelation, and the revelation leads back into the story, and the building can then go on in the mind and imagination of the reader. Think of Hemingway’s classic ‘Hills Like White Elephants’. That’s a longer narrative, but Susan’s stories work in much the same elegant way. It’s such a nice feeling.’ 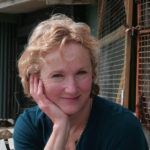 Susan McCreery is a writer from Thirroul in New South Wales. Her microfiction has been published by Spineless Wonders (Writing to the Edge, Flashing the Square and Out of Place), as well as by Seizure and Cuttlefish. Her poetry and short fiction have also appeared in Best Australian Poems 2009, Sleepers Almanac, Going Down Swinging, Hecate, Five Bells and Island, among others.